Goodreads helps you keep track of books you want to read.
Start by marking “Shadow Eclipse: Voyage” as Want to Read: 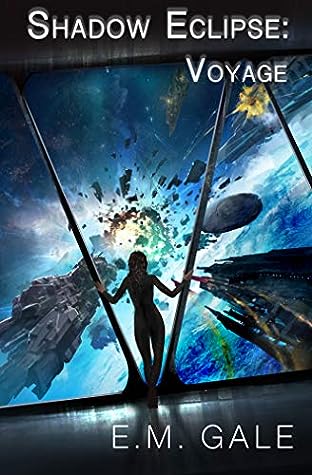 We’d love your help. Let us know what’s wrong with this preview of Shadow Eclipse by E.M. Gale.

by
E.M. Gale (Goodreads Author)
4.61  ·  Rating details ·  18 ratings  ·  5 reviews
Florentina Clarke has enough problems. She's turning into a vampire, has been fired into the far-future by participation in an ill-advised science experiment, and has discovered that her future self is a general. She signs on to a small, fast smuggling ship, but everything isn't what it seems. Can she figure out what the ship is up to before its secrets destroy her?

Florentina Clarke has enough problems. She's turning into a vampire, has been fired into the far-future by participation in an ill-advised science experiment, and has discovered that her future self is a general. She signs on to a small, fast smuggling ship, but everything isn't what it seems. Can she figure out what the ship is up to before its secrets destroy her?

Shadow Eclipse: Voyage is the first book in the Shadow Eclipse series, following the adventures of Florentina Clarke across time and space.

To ask other readers questions about Shadow Eclipse, please sign up.

Be the first to ask a question about Shadow Eclipse

I will warn people that this is a _long_ book (more epic fantasy than urban fantasy) - which is one of my main complaints: I feel it is really two books and the flow of the story beats feel like two books, so I don't know why the author left it like this.

As I started with, I struggle to pigeon hole this. Is it urban fantasy? yes. sci-fi? yes. I guess the closest touchstones I can think of are shadowrun (if it was space opera rather than cyberpunk) or the deathstalker books. I would also look to Micheal Scott-Earle's books (Star justice in particular), although the gender of the hero puts it outside his normal segment (view spoiler)[Especially as the lead is fairly sexually active, although also FTB (hide spoiler)]. But at the end of the day, time-travelling vampires in space - what's not to like? ...more

Dec 29, 2019 Kerry Sharp rated it it was amazing
Good but could have been better

A long book, which was paced nicley, I never thought if putting it down. But, despite the length it ended unsatisfactorly. Obviously some plotlines need to be solved in later books but this was an episode not a story.
The plot was intricate and pleasing, so I was not as appalled with this books lame ending as with many, but it was still lame.

Nov 15, 2019 Andrew Wade rated it it was amazing
A cool book that ticks all yer fantasy, sci-fi and horror boxes. I loved watching Clarke get into scrapes almost as much as I enjoyed finding out how she got out of them! Set in a universe that has time travel AND spaceships AND vampires AND Orcs, there's enough interplanetary fun and frolics for everyone. A must for all geeky genre fans of all the geeky genres!

Dec 31, 2019 Tayra Sanders rated it really liked it
This is a fantastic and well written book. An intense story line that holds your attention as you get caught up in the fierce twists and hot chemistry.

Nov 14, 2019 Hazel rated it it was amazing
Thrown forward in time a vampire with a Phd travels space just trying to survive. Whats not to love?
I really enjoyed this and can't wait to read what happens next.
I received a free ARC of this via Booksprout

monique thorngren rated it it was amazing
Jan 10, 2020