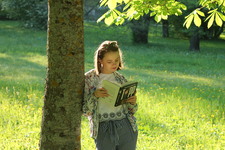 This will prevent Mariann from sending you messages, friend request or from viewing your profile. They will not be notified. Comments on discussion boards from them will be hidden by default.
Sign in to Goodreads to learn more about Mariann.

See all 5 books that Mariann is reading…

“Everyone lives in two worlds,” Maggie said, speaking in an absentminded sort of way while she studied her letters. “There’s the real world, with all its annoying facts and rules. In the real world, there are things that are true and things that aren’t. Mostly the real world s-s-s-suh-sucks. But everyone also lives in the world inside their own head. An inscape, a world of thought. In a world made of thought—in an inscape—every idea is a fact. Emotions are as real as gravity. Dreams are as powerful as history. Creative people, like writers, and Henry Rollins, spend a lot of their time hanging out in their thoughtworld. S-s-strong creatives, though, can use a knife to cut the stitches between the two worlds, can bring them together. Your bike. My tiles. Those are our knives.”
― Joe Hill, NOS4A2
tags: creative, creative-process, creative-thinking, friendship, scrabble, wordplay, words
49 likes

“Make them pay you what they would pay a white man.”
― Taylor Jenkins Reid, The Seven Husbands of Evelyn Hugo
149 likes

“I declare after all there is no enjoyment like reading! How much sooner one tires of any thing than of a book! -- When I have a house of my own, I shall be miserable if I have not an excellent library.”
― Jane Austen, Pride and Prejudice
tags: books, library, reading
17922 likes

“Soldiers and children do as they're told. Children grow out of it, but soldiers just die.”
― Laini Taylor, Dreams of Gods and Monsters
305 likes

Books I've Convinced Myself That I'm The Actual Heroine

Polls voted on by Mariann