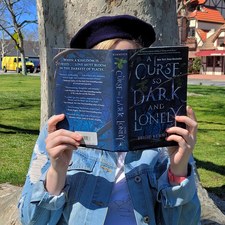 This will prevent megan from sending you messages, friend request or from viewing your profile. They will not be notified. Comments on discussion boards from them will be hidden by default.
Sign in to Goodreads to learn more about megan.

All right, so let’s start off with the things that I did like about ACOWAR:

1. Getting to see all of my favorite characters again. Yes, give me more of Cassian, Mor, and Azriel. Give me more of the Night Court in general. Let it become real. Let me live there. Even if the quiz says I belong in the Winter Court. We are friends and allies. I will eternally vacation in the Night Court instead. And I don’t think it’s necessary to mention that I loved getting to see my OTP again and all the magicalness that is their relationship.

2. The character development of Feyre’s sisters. After being so upset with them during ACOTAR and thinking they were basically the worst sisters to ever walk the planet, I was glad to see a different side to them after what happened in the ending of ACOMAF. Once upon a time, I was Nesta in every way; and although I am very glad that I am not like her anymore, I still loved getting to see her character develop and read as she broke out of her shell.

3. Tamlin. Yes. Who would have ever thought that I would say that I like Tamlin? Well, I mean, I still don’t but I LOVE what Sarah did with his character in this book. It’s so real and “human” and raw in so many ways that I actually felt some sympathy for him. Yes, that is right. I felt sorry for Tamlin in this book. And I really liked seeing his motivation behind his actions throughout the book. Even though ACOWAR wasn’t really meant to focus on Tamlin whatsoever, I still think he was one of the best developed characters in it.

And now on to the things that I didn’t like about ACOWAR:

1. The pacing. It was weird. I went into this book thinking I was going to get some serious kickbutt scenes while Feyre was in the Spring Court. ACOMAF basically promised me that. And then Feyre spends less than 100 pages there. I guess I just expected us to take more time there than we did. And I also just expected more of an epic climax in the Spring Court than the subtle cave-ins Feyre planted. I didn’t hate the Spring Court parts; I just expected more. Furthermore on the pacing, this book was slow for me. After the whirlwind I experienced with ACOMAF, I was ready for another whirlwind experience again. But instead I felt like I was reading a book with far too many details and far too much suspense-building for its entirety. Nothing really happens until the end honestly. The entire 700-page book is a build-up for the end. Not my favorite thing to be honest.

2. What was even the point of Lucien throughout this? I hated that he had no real resolution (especially considering that this was supposed to be the end! I mean, we know he’s pretty much guaranteed to be one of the companion novel characters but what gives for poor Lucien??). The entire time I felt like he was just this loose character that Sarah didn’t really know what to do with so he just floated around for a while before being sent on his mission. I’ve always liked Lucien and still do after this book but he deserved more.

3. The prose and characterization felt repetitive. I’ve never noticed Sarah before using the same words over and over again. But if I had to read “stared and stared and stared” one more time, I was gonna lose it. I get it. Nesta isn’t the most talkative person ever. But I didn’t need the repeated words every time her character was talked about. And not only that, the characterization carried on to Elain with her “staring and staring.” There was also at least twice that I feel that Nesta and Elain got mixed up. Something was said about Nesta only for it to be thrown with Elain even though it didn’t happen to Elain (if that makes sense). Simply put, I felt that the writing was just a bit weaker in this book than any other book I’ve ever read of Sarah’s before (except maybe ACOTAR but it’s been years since I’ve read that book and I need to reread it soon).

And then the ending. It was a bit predictable in some aspects. But I was really, really, really mad at one event that happened (I’m sure we all know what I’m talking about). The resolution of the event was predictable and I was okay with the outcome. But I’m still angry about it. My characters deserve more!

I am interested to see what the companion novels will be like for the series. I have an idea of what characters are going to get spinoffs but you really never know what Sarah is going to throw in with them. I just hope to see more of my OTP because I am not done loving these characters

“If you do not breathe through writing, if you do not cry out in writing, or sing in writing, then don't write, because our culture has no use for it.”
― Anais Nin
tags: writing
1900 likes

“There is nothing to writing. All you do is sit down at a typewriter and bleed.”
― Ernest Hemingway
tags: good, writing
18991 likes

“The role of a writer is not to say what we can all say, but what we are unable to say.”
― Anais Nin
tags: writing
2467 likes

“Isn't it nice to think that tomorrow is a new day with no mistakes in it yet?”
― L.M. Montgomery
tags: beginnings, fresh-start, inspirational, mistake, mistakes, new-day, start-over, tomorrow
8760 likes

“The most important things are the hardest to say. They are the things you get ashamed of, because words diminish them -- words shrink things that seemed limitless when they were in your head to no more than living size when they're brought out. But it's more than that, isn't it? The most important things lie too close to wherever your secret heart is buried, like landmarks to a treasure your enemies would love to steal away. And you may make revelations that cost you dearly only to have people look at you in a funny way, not understanding what you've said at all, or why you thought it was so important that you almost cried while you were saying it. That's the worst, I think. When the secret stays locked within not for want of a teller but for want of an understanding ear.”
― Stephen King
tags: writing
5617 likes

Reading Lists (Select)
7 chapters   —   updated Jan 02, 2016 01:46AM
Description: Since 2009, I have kept a list of all of the titles of the books I read that year. Thought it would be fun to add them onto here. Also, it would be an additional place to keep them safe. I won't update the current year's and will only post it when the year is over.

Renée Ahdieh
author of: The Wrath and the Dawn

Polls voted on by megan