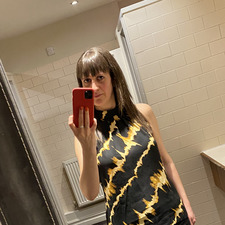 This will prevent Claire from sending you messages, friend request or from viewing your profile. They will not be notified. Comments on discussion boards from them will be hidden by default.
Sign in to Goodreads to learn more about Claire.

See all 26 books that Claire is reading…

“Only a psychopath would ever think of doing these things, only a psychopath would dream of abusing other people in such a way, only a psychopath would treat people as less than human just for money. The shocking truth is, even though they now have most if not all of the money, they want still more, they want all of the money that you have left in your pockets, they want it all because they have no empathy with other people, with other creatures, they have no feeling for the world which they exploit, they have no love or sense of being or belonging for their souls are dead, dead to all things but greed and a desire to rule over others.”
― Arun D. Ellis, Corpalism
tags: dystopian-fiction, dystopian-future, dystopian-thriller, economic-collapse, economic-inequality, economics-philosophy, economics-society, political-philosophy, political-satire, political-theory, political-thriller
233 likes

Mel Sherratt
author of: The Girls Next Door

Most Anticipated Novels of 2017

Polls voted on by Claire