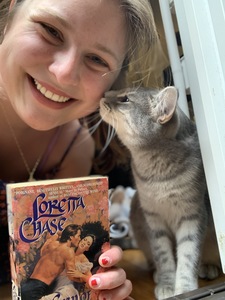 This will prevent Mazey from sending you messages, friend request or from viewing your profile. They will not be notified. Comments on discussion boards from them will be hidden by default.
Sign in to Goodreads to learn more about Mazey .

Ten Ways to Be Adored When Landing a Lord (Love By Number, #2) by Sarah MacLean
2 notes & 3 highlights
“I am not perfect. I cannot promise you that I will not do things that will hurt you.” He paused, his scar a pale

“A man is not entitled to be called a father merely because he once had a well-timed spasm of the loins.”
― Lisa Kleypas, Marrying Winterborne
40 likes

“Helen, don’t.”
“I thought it was only a misunderstanding. I thought if I spoke to you directly, everything would be s-sorted out, and—” Another sob choked her. She was so consumed by emotion that she was only vaguely aware of Rhys hovering around her, reaching for her and snatching his hands back.
“No. Don’t cry. For God’s sake, Helen—”
“I didn’t mean to push you away. I didn’t know what to do. How can I make you want me again?”
She expected a jeering reply, or perhaps even a pitying one. The last thing she expected was his shaken murmur.
“I do want you, cariad. I want you too damned much.”
She blinked at him through a bewildered blur, breathing in mortifying hiccups, like a child. In the next moment, he had hauled her firmly against him.
“Hush, now.” His voice dropped to a deeper octave, a brush of dark velvet against her ears. “Hush, bychan, little one, my dove. Nothing is worth your tears.”
“You are.”
― Lisa Kleypas, Marrying Winterborne

“Every time you look at me, you'll remember that I'm half his."
"No." His hand came to the side of her face, his thumb wiping her tears. "You're all mine." His voice was deep and shaken. "Every hair on your head. Every part of you was made to be loved by me.”
― Lisa Kleypas, Marrying Winterborne
tags: acceptance, helen-ravenel, love, rhys-winterborne
39 likes

“Whatever else you may think about me," he said gruffly, "I would never play that kind of game with you. The devil knows how you could doubt my attraction to you after our lesson at Baujart's. Or didn't you notice that being near you made me as randy as a prize bull?"
"I noticed," Garrett whispered sharply. "However, the male erection isn't always caused by sexual desire."
His face went blank. "What are you talking about?"
"Spontaneous priapism can be caused by scrotal chafing, traumatic injury to the perineum, a flare-up of gout, an inflamed prostatic duct-" Her list was interrupted as Ransom hauled her against him, front to front.
She was alarmed to feel his entire body shaking. It wasn't until she heard a ragged chuckle near her ear that she realized he was struggling not to laugh.
"Why is that funny?" she asked, her voice muffled against his chest. He didn't reply, couldn't, only shook his head vehemently and continued to wheeze. Nettled, she said, "As a physician, I can assure you there's nothing humorous about involuntary erections."
That nearly sent him into hysterics.
"Holy God," he begged, "no more doctor-talk. Please."
"It wasn't from scrotal chafing," Ransom eventually said, a last tremor of laughter running through his voice. Letting out an unsteady sigh, he nuzzled against the side of her head. "Since we don't seem to be mincing words, I'll tell you what caused it: holding a woman I'd already dreamed about more than I should. Being near you is all it takes to put me in high blood.”
― Lisa Kleypas, Hello Stranger
tags: erection, garrett-and-ethan, symptoms
4 likes

“Will you swear on your honor to keep it in confidence?” “Of course,” Devon said readily. Having no honor, he never hesitated to promise something on it. Helen”
― Lisa Kleypas, Cold-Hearted Rake
2 likes

Polls voted on by Mazey