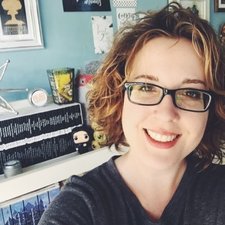 This will prevent Christina from sending you messages, friend request or from viewing your profile. They will not be notified. Comments on discussion boards from them will be hidden by default.
Sign in to Goodreads to learn more about Christina.

Christina is currently reading
The Will To Kill: Making Sense of Senseless Murder
by James Alan Fox
bookshelves: currently-reading

Christina is currently reading
The Magic Kingdom: Walt Disney and the American Way of Life
by Steven Watts
bookshelves: currently-reading

See all 11 books that Christina is reading…

The Disasters by M.K. England
5 highlights
Hello, now we definitely have to live through this.
See Christina’s 31 books with notes and highlights…

“Stealing from one author is plagiarism; from many authors, research.”
― Walter Moers, The City of Dreaming Books
192 likes

“I think we ought to read only the kind of books that wound or stab us. If the book we're reading doesn't wake us up with a blow to the head, what are we reading for? So that it will make us happy, as you write? Good Lord, we would be happy precisely if we had no books, and the kind of books that make us happy are the kind we could write ourselves if we had to. But we need books that affect us like a disaster, that grieve us deeply, like the death of someone we loved more than ourselves, like being banished into forests far from everyone, like a suicide. A book must be the axe for the frozen sea within us. That is my belief.”
― Franz Kafka
tags: reading
3417 likes

“...that the Musgroves had had the ill fortune of a very troublesome, hopeless son; and the good fortune to lose him before he reached his twentieth year; that he had been sent to sea, because he was stupid and unmanageable on shore; that he had been very little cared for at any time by his family, though quite as much as he deserved; seldom heard of, and scarcely at all regretted... He had, in fact, though his sisters were now doing all they could for him, by calling him 'poor Richard,' been nothing better than a thick-headed, unfeeling, unprofitable Dick Musgrove, who had never done anything to entitle himself to more than the abbreviation of his name, living or dead.”
― Jane Austen, Persuasion
106 likes

“When I explained it to her, she went silent and turned her face to the wall, still as the sky before a lightning strike.”
― Nghi Vo, The Empress of Salt and Fortune
2 likes

Little Witch of the Wood

Polls voted on by Christina