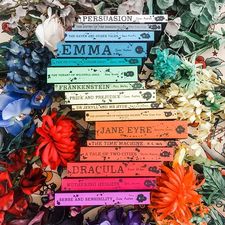 Error rating book. Refresh and try again.
Rate this book
Clear rating
1 of 5 stars2 of 5 stars3 of 5 stars4 of 5 stars5 of 5 stars
progress:    (20%) "I just haaaaad to continue this series to find out what happens. So many illogical things! Why would she continue the spy mission with no training and when they have the ship with the hyperdrive? Did it not have one? I’m so confused" — Jan 22, 2021 05:45AM
See all 8 books that Tattooed Bibliophile is reading…

“You might get only one shot. So shoot. You know who said that?"
The rifle clatters to the bloody floor.
"Hanna FUCKING Donnelly. That's who.”
― Jay Kristoff, Gemina
tags: gemina, hannadonnelly, illuminae, sci-fi, science-fiction
156 likes

“She'd never broken a bone, had surgery. But the worst damage didn't leave a mark. When Hellie died, it was as if someone had cut into Alex's chest, cracked her open like balsa wood. What if it really had been like that and she'd had to walk down the street bleeding, trying to hold her ribs together, her heart and her lungs and every part of her open to the world? Instead, the thing that had broken her had left no mark, no scar for her to point to and say, This is where I ended.”
― Leigh Bardugo, Ninth House
tags: grief, loss
11 likes

“Well, here I am, you deviant bitch. Here I bloody am. The motherfucking consequence.”
― Pierce Brown, Dark Age
31 likes

“They too, knew this beautiful and harrowing landscape; they'd had the same experience of looking up from their books with fifth-century eyes and finding the world disconcertingly sluggish and alien, as if it were not their home.”
― Donna Tartt, The Secret History
tags: ancient-greeks, classics, language, scholarship
69 likes

“Maybe we need thousands of smaller heroes every day every day instead of the occasional big one.”
― Shamim Sarif, The Athena Protocol
tags: heroes
0 likes

Polls voted on by Tattooed Bibliophile