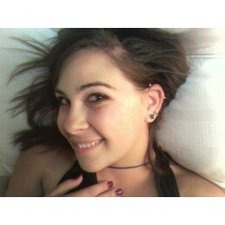 See all 11 books that Elizabeth is reading…

Cocky Roomie (Cocker Brothers of Atlanta, #1) by Faleena Hopkins
9 notes & 12 highlights
sleepless night
Why is it sleepless? Her urgency for a new apartment is confusing.
Tara Cignarella liked this

“That's right," said Door. Her cheek lightly grazed and her dirty reddish hair was tangled; tangled but not matted. And her eyes...Richard realized that he could not tell what color her eyes were. They were not blue, or green, or brown, or gray; they reminded him of fire opals: there were burning greens and blues, and even reds and yellows that vanished and glinted as she moved.”
― Neil Gaiman, Neverwhere
tags: eyes, opal
1 likes

“While Alpha Males are often gifted with superior physical attributes—size, strength, speed, good looks—selected by evolution over the eons by the strongest surviving and, essentially, getting all the girls, the Beta Male gene has survived not by meeting and overcoming adversity, but by anticipating and avoiding it. That is, when the Alpha Males were out charging after mastodons, the Beta Males could imagine in advance that attacking what was essentially an angry, woolly bulldozer with a pointy stick might be a losing proposition, so they hung back at camp to console the grieving widows. When Alpha Males set out to conquer neighboring tribes, to count coups and take heads, Beta Males could see in advance that in the event of a victory, the influx of female slaves was going to leave a surplus of mateless women cast out for younger trophy models, with nothing to do but salt down the heads and file the uncounted coups, and some would find solace in the arms of any Beta Male smart enough to survive. In the case of defeat, well, there was that widows thing again. The Beta Male is seldom the strongest or the fastest, but because he can anticipate danger, he far outnumbers his Alpha Male competition. The world is led by Alpha Males, but the machinery of the world turns on the bearings of the Beta Male.”
― Christopher Moore, A Dirty Job
4 likes

“She didn’t need a paper dog reminding her what a fool brain she had inside her skull.”
― Charlie N. Holmberg, The Paper Magician
0 likes

“Fuck!” I cried, unable to bear another climax, unable to live without it.”
― Laurelin Paige, Fixed on You
4 likes

Morgan Rice
author of: A Quest of Heroes

Deborah Harkness
author of: A Discovery of Witches
More…

Best Fantasy of the 50s