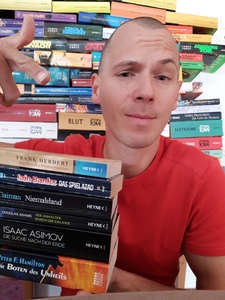 “We are all susceptible to the pull of viral ideas. Like mass hysteria. Or a tune that gets into your head that you keep humming all day until you spread it to someone else. Jokes. Urban legends. Crackpot religions. Marxism. No matter how smart we get, there is always this deep irrational part that makes us potential hosts for self-replicating information.”
― Neal Stephenson, Snow Crash
66 likes

“Once upon a time, in some out of the way corner of that universe which is dispersed into numberless twinkling solar systems, there was a star upon which clever beasts invented knowing. That was the most arrogant and mendacious minute of "world history," but nevertheless, it was only a minute. After nature had drawn a few breaths, the star cooled and congealed, and the clever beasts had to die. One might invent such a fable, and yet he still would not have adequately illustrated how miserable, how shadowy and transient, how aimless and arbitrary the human intellect looks within nature. There were eternities during which it did not exist. And when it is all over with the human intellect, nothing will have happened.”
― Friedrich Nietzsche, On Truth and Lies in a Nonmoral Sense
tags: humility
33 likes

“Females create life, males end it. War, crime, violence, are primarily male franchises. Man shit. It’s nature’s supreme joke.
Deep in the womb, men start out as the good thing, and wind up as the crappy thing. Not all men. Just enough. Just enough to fuck things up.”
― George Carlin, When Will Jesus Bring the Pork Chops?
29 likes

“Lonely people tend, rather, to be lonely because they decline to bear the psychic costs of being around other humans. They are allergic to people. People affect them too strongly.”
― David Foster Wallace, A Supposedly Fun Thing I'll Never Do Again: Essays and Arguments
tags: humans, loneliness, lonely-people, relationships
674 likes


People Mario the lo... is Following

Polls voted on by Mario the lone bookwolf