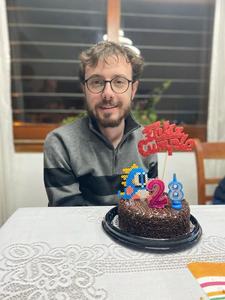 This will prevent Santiago from sending you messages, friend request or from viewing your profile. They will not be notified. Comments on discussion boards from them will be hidden by default.
Sign in to Goodreads to learn more about Santiago.

Randomize by Andy Weir
2 highlights
He never trusted nondrinkers. They either didn’t know how to enjoy life or they were self-righteous.
See Santiago’s 3 books with notes and highlights…

“Hassan, he has the makings of a great chef, it is true, and he has talent beyond anything you and I possess.”
― Richard C. Morais, The Hundred-Foot Journey
1 likes

“Human beings were never meant to participate in a worldwide social network comprised of billions of people. We were designed by evolution to be hunter-gatherers, with the mental capacity to interact and socialize with the other members of our tribe—a tribe made up of a few hundred other people at most. Interacting with thousands or even millions of other people on a daily basis was way too much for our ape-descended melons to handle. That was why social media had been gradually driving the entire population of the world insane since it emerged back around the turn of the century.”
― Ernest Cline, Ready Player Two
13 likes

“Tomorrow I will have that woman removed. Finish. I will not have this. She is an insult to the memory of Gandhi, using these techniques on us.”
― Richard C. Morais, The Hundred-Foot Journey
1 likes

“It was hell on Earth—in Canada, of all places. The noise was nearly deafening. It sounded like the end of the world.”
― Nick Pobursky, Hollow World: Origins
0 likes

Marc *Dark Reader of the Woods*

H.P. Lovecraft
author of: The Call of Cthulhu and Other Weird Stories

Polls voted on by Santiago