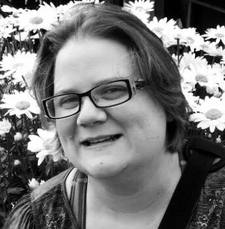 This will prevent Kris from sending you messages, friend request or from viewing your profile. They will not be notified. Comments on discussion boards from them will be hidden by default.
Sign in to Goodreads to learn more about Kris.

Kris Dersch is currently reading
The Garden of My Imaan
by Farhana Zia
bookshelves: currently-reading

See all 5 books that Kris is reading…

“I never want to forget that if Lewis Carroll had asked me whether or not he should bother writing about a little girl named Alice who fell asleep and dreamed that she had a lot of adventures down a rabbit hole, it would not have sounded awfully tempting to any editor.”
― Ursula Nordstrom, Dear Genius: The Letters of Ursula Nordstrom
tags: children-s-books, creativity, stories, writing
1 likes

“Childhood is not the happiest time of one's life, but only to a child is pure happiness possible.”
― A.A. Milne, It's Too Late Now: The Autobiography of a Writer
tags: childhood, happiness
1 likes

“Fiction is like wrestling with angels-you do not expect to win, but you do expect to come away from the experience changed.”
― Jane Yolen, Take Joy: A Writer's Guide to Loving the Craft
tags: angels, fiction, reading, writing
3 likes

“What do they have in common, all these people I read in college and thereafter? All men, and all dead. Their distance from us in chronology seems to give them overwhelming authority. But they were not dead when they wrote and they were as human as the rest of us. They caught colds in damp weather and had occasional pimples in adolescence. I like to think that they enjoyed making love, spending an evening with friends, tramping through the woods with the dogs. The fact that they were men simply speaks for their day when women may have been powers behind the throne; but they were kept behind it.
Whatever possessed these writers to sit down and write their view on the creative process? Maybe they were prodded, as I have been, and maybe at least a few of them hesitated at the presumption of it.”
― Madeleine L'Engle, Walking on Water: Reflections on Faith and Art
tags: philosophy, reading, women, writing
1 likes

“Books are not written about proper children. They would be so dull no one would read them.”
― L.M. Montgomery, Emily Climbs
tags: creativity, kidslit, manners, writing
1 likes

Polls voted on by Kris