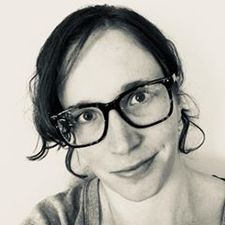 This will prevent Alyssa from sending you messages, friend request or from viewing your profile. They will not be notified. Comments on discussion boards from them will be hidden by default.
Sign in to Goodreads to learn more about Alyssa.

Alyssa Graybeal is currently reading
This Is How We Survive: Revolutionary Mothering, War, and Exile in the 21st Century
by Mai’a Williams
bookshelves: currently-reading

See all 5 books that Alyssa is reading…

“It’s not that I want children to fall into the pond per se, though I can’t really see what harm it would do them; it’s that I can’t help but assess the situation from the child’s perspective. And quite frankly I would be disgusted to the point of taking immediate vengeance if I was brought to a purportedly magical place one afternoon in late September and thereupon belted down to the pond, all by myself most likely, only to discover the word pond scrawled on a poxy piece of damp plywood right there beside it. Oh I’d be hopping. That sort of moronic busybodying happens with such galling regularity throughout childhood of course and it never ceases to be utterly vexing.”
― Claire-Louise Bennett, Pond
1 likes

“My absence would hardly be conspicuous anyway since it was going to be a big day in many places that day due to the fact that all kinds of events had been organised all over the country so that all sorts of people could discover and participate in the cultural life in their particular region. That being the case, since I appear to be a very culturally oriented sort of person, it is perfectly plausible that I was already under enormous pressure to negotiate a riveting panoply of worthy ventures further afield.”
― Claire-Louise Bennett, Pond
0 likes

“None of that has anything to do with now by the way. Despite how promising I seem to have made the encounter with the man and the hot water bottle sound it was in fact an ill-starred liaison and, perhaps less surprisingly, the inviability of my academic career eventually acquired a palpability of such insidious force that one day I came out of a shop unwrapping a pack of cigarettes and went nowhere for approximately half an hour. My wherewithal had quite dried up you see, I’d snubbed it for so long it had completely dried up and so I had come to a standstill, not knowing at all whether to turn left or right.”
― Claire-Louise Bennett, Pond
0 likes

“Where is my fucking sense of eventuality actually?”
― Claire-Louise Bennett, Pond
2 likes

Aimee Bender
author of: The Particular Sadness of Lemon Cake

Megan Abbott
author of: You Will Know Me

Ariel Gore
author of: We Were Witches

Polls voted on by Alyssa