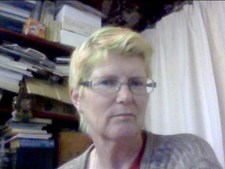 This will prevent Kathleen from sending you messages, friend request or from viewing your profile. They will not be notified. Comments on discussion boards from them will be hidden by default.
Sign in to Goodreads to learn more about Kathleen.

See all 16 books that Kathleen is reading…

“Terry took the silence as acquiescence, “The other way to make money is to exploit people, oh, no sorry, that’s the ‘only’ way to make money, exploit other people, that’s how the billionaires have acquired all their money by exploiting others… So how did they achieve it? You’re going to love this… they changed all the rules to accommodate what they wanted to do. How I hear you ask… easy, they own the politicians, they own the banks, they own industry and they own everything. They made it easier for themselves to invest in so called emerging markets. What once would’ve been considered treasonous was now considered virtuous. Instead of building up the nation state and its resources, all of its resources, including its people, they concentrated on building up their profits. That’s all they did. They invested in parts of the world where children could be worked for 12 hours a day 7 days a week, where grown men and women could be treated like slaves and all for a pittance and they did this because we here in the west had made it illegal to work children, because we’d abolished slavery, because we had fought for workers’ rights, for a minimum wage, for a 40 hr week, for pensions, for the right to retire, for a free NHS, for free education, all of these things were getting in the way of them making a quick and easy profit and worse …had been making us feel we were worth something.”
― Arun D. Ellis, Corpalism
tags: drama, economic-history, economics, history, mystery, people, people-inspire-people, political, political-philosophy, political-thriller, sociology-class-warfare, thriller
7 likes

“Ward: Which would you rather have, a National Book Award or a Hugo?
Le Guin: Oh, a Nobel, of course.
Ward: They don't give Nobel Awards in fantasy.
Le Guin: Maybe I can do something for peace.”
― Ursula K Le Guin

“Imagination is the golden-eyed monster that never sleeps. It must be fed; it cannot be ignored.”
― Patricia A. McKillip
tags: imagination
1916 likes

“... because what good would it do when a true understanding of what was in store for them couldn't save them from any of it?”
― Elizabeth Knox, The Absolute Book
0 likes

“Always do your best in whatever you do;
set goals and seek challenges;
become a role model for those coming behind you; and
always have God in your heart.”
― Charles F. Bolden

Julie Thomas
author of: The Keeper of Secrets

Temple Grandin
author of: Thinking in Pictures: My Life with Autism
More…

Polls voted on by Kathleen