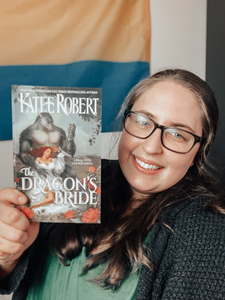 This will prevent Sara Reads Romance from sending you messages, friend request or from viewing your profile. They will not be notified. Comments on discussion boards from them will be hidden by default.
Sign in to Goodreads to learn more about Sara Reads Romance.

Sara Reads Romance is currently reading
Songs of the Hunted (Realms of Glass and Blood, #1)
by K. Fournier
bookshelves: currently-reading

Dipped in Holly (Nick and Holly, #1) by Dana Isaly
2 highlights
This is the kiss. This is the kiss that makes you realize you’ve been missing out your entire life on having the shit kissed out of you.
See Sara Reads Romance’s 12 books with notes and highlights…

“Pain always reminds us that we’re alive. And the fear along with it that we want to stay that way.”
― Penelope Douglas, Credence
49 likes

“I want to feast like a glutton, spread lust on my breakfast toast, shoot violence and sip greed. And I want you to teach me, sinner man, because you’re the only man for the job,” I told him.”
― Giana Darling, Welcome to the Dark Side
3 likes

“If love be rough with you, be rough with love. Prick love for pricking and you beat love down.”
― William Shakespeare, Romeo & Juliet
tags: love
509 likes

“Smile. Nod. Say
something witty
before he finds
out what an incredible
geek you are.”
― Ellen Hopkins, Crank