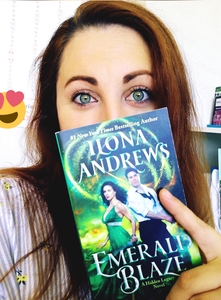 This will prevent Lucia from sending you messages, friend request or from viewing your profile. They will not be notified. Comments on discussion boards from them will be hidden by default.
Sign in to Goodreads to learn more about Lucia.

“The Wheel of Time turns, and Ages come and pass, leaving memories that become legend. Legend fades to myth, and even myth is long forgotten when the Age that gave it birth comes again.”
― Robert Jordan
tags: fiction
655 likes

“There's nothing mysterious about it, He's not working at all. He's playing. Or else He's forgotten all about us. That's the kind of God you people talk about, a country bumpkin, a clumsy, bungling, brainless, conceited, uncouth hayseed. Good God, how much reverence can you have for a Supreme Being who finds it necessary to include such phenomena as phlegm and tooth decay in His divine system of Creation? What in the world was running through that warped, evil, scatological mind of His when He robbed old people of the power to control their bowel movements? Why in the world did He ever create pain?”
― Joseph Heller, Catch 22
tags: religion
162 likes

“Books have to be heavy because the whole world's inside them.”
― Cornelia Funke, Inkheart
tags: inkheart
2883 likes

“Be not afraid of greatness. Some are born great, some achieve greatness, and others have greatness thrust upon them.”
― William Shakespeare, Twelfth Night
tags: greatness
15169 likes

Polls voted on by Lucia