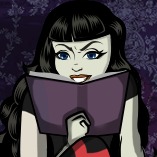 This will prevent Brooke from sending you messages, friend request or from viewing your profile. They will not be notified. Comments on discussion boards from them will be hidden by default.
Sign in to Goodreads to learn more about Brooke.

“All those stories must have ended this same way, with someone tired going home from a field full of death, but no one ever sang this part.”
― Naomi Novik, Uprooted
43 likes

“got my country’s five hundredth anniversary to plan, my wedding to arrange, my wife to murder, and Guilder to frame for it,”
― Patricia Briggs, Fire Touched
8 likes

“He’d also agreed to be betrothed to the Archduke of Varsha’s daughter, a girl of nine who had evidently impressed him a great deal by being able to spit across a garden plot. I was a little dubious about this as a foundation for marriage, but I suppose it wasn’t much worse than marrying her because her father might have stirred up rebellion, otherwise.”
― Naomi Novik, Uprooted
19 likes

“He was a better fighter than I was, but he wasn’t faster than me. Nor was he as motivated, and I think he underestimated me. He thought he was fighting a girl with a stick when he was fighting Adam’s mate, Coyote’s daughter, armed with Lugh’s staff.”
― Patricia Briggs, Fire Touched
15 likes

ALA's Most Challenged Books of 2014

Polls voted on by Brooke