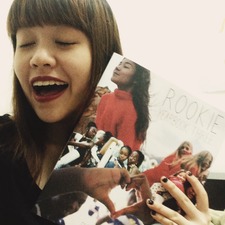 This will prevent Michelle from sending you messages, friend request or from viewing your profile. They will not be notified. Comments on discussion boards from them will be hidden by default.
Sign in to Goodreads to learn more about Michelle.

“We've got to have rules and obey them. After all, we're not savages. We're English, and the English are best at everything.”
― William Golding, Lord of the Flies
tags: farcical, nationalism, poignant, pride
214 likes

“I was trying to feel some kind of good-bye. I mean I’ve left schools and places I didn’t even know I was leaving them. I hate that. I don’t care if it’s a sad good-bye or a bad good-bye, but when I leave a place I like to know I’m leaving it. If you don’t you feel even worse.”
― J.D. Salinger, The Catcher in the Rye
tags: goodbye, holden
1048 likes

“It's only after we've lost everything that we're free to do anything.”
― Chuck Palahniuk, Fight Club
tags: loss
9271 likes

“Anyway, I keep picturing all these little kids playing some game in this big field of rye and all. Thousands of little kids, and nobody's around - nobody big, I mean - except me. And I'm standing on the edge of some crazy cliff. What I have to do, I have to catch everybody if they start to go over the cliff - I mean if they're running and they don't look where they're going I have to come out from somewhere and catch them. That's all I do all day. I'd just be the catcher in the rye and all. I know it's crazy, but that's the only thing I'd really like to be.”
― J. D. Salinger, The Catcher in the Rye
tags: holden, holden-caulfield, hope, run, save
3570 likes

“I read the first chapter of A Brief History of Time when Dad was still alive, and I got incredibly heavy boots about how relatively insignificant life is, and how compared to the universe and compared to time, it didn't even matter if I existed at all. When Dad was tucking me in that night and we were talking about the book, I asked if he could think of a solution to that problem. "Which problem?" "The problem of how relatively insignificant we are." He said, "Well, what would happen if a plane dropped you in the middle of the Sahara Desert and you picked up a single grain of sand with tweezers and moved it one millimeter?" I said, "I'd probably die of dehydration." He said, "I just mean right then, when you moved that single grain of sand. What would that mean?" I said, "I dunno, what?" He said, "Think about it." I thought about it. "I guess I would have moved one grain of sand." "Which would mean?" "Which would mean I moved a grain of sand?" "Which would mean you changed the Sahara." "So?" "So? So the Sahara is a vast desert. And it has existed for millions of years. And you changed it!" "That's true!" I said, sitting up. "I changed the Sahara!" "Which means?" he said. "What? Tell me."
"Well I'm not talking about painting the Mona Lisa or curing cancer. I'm just talking about moving that one grain of sand one millimeter." "Yeah? If you hadn't done it, human history would have been one way..." "Uh-huh?" "But you did do it, so...?" I stood on the bed, pointing one of my fingers at the fake stars, and screamed: "I changed the course of human history!" "That's right." "I changed the universe!" "You did." "I'm God!" "You're an atheist." "I don't exist!" I fell back onto the bed, into his arms, and we cracked up together.”
― Jonathan Safran Foer
tags: athiesm, existance, fathers-and-sons
69 likes

Polls voted on by Michelle