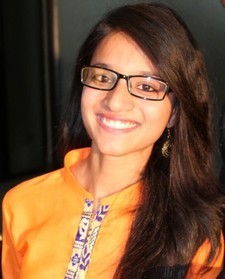 This will prevent Khyati from sending you messages, friend request or from viewing your profile. They will not be notified. Comments on discussion boards from them will be hidden by default.
Sign in to Goodreads to learn more about Khyati.

Reflections of a Mind: Perspective Poetry of Our Being by GURMEET SINGH
1 highlight
I know, I can find my way to the celestials. Although I’ll need blackness of the burns.
See Khyati Gautam’s 9 books with notes and highlights…

“I finally recover use of my voice. “It wasn’t your fault, Rajkumar . You didn’t do anything.”

“No, I didn’t. And with my silence, I became an accomplice.”
― Tanaz Bhathena, Hunted by the Sky
tags: fantasy, favorite-quotes, huntedbythesky, yafantasy
4 likes

“Alone is a feeling you can get used to, and it's hard to believe in a better alternative.”
― Akwaeke Emezi, The Death of Vivek Oji
12 likes

“Accept love, no matter how barbed it may look. It is the only way to restore balance in the world.”
― Tanaz Bhathena, Hunted by the Sky
tags: favorite-lines, favorite-quotes, huntedbythesky, yafantasy
5 likes

“There are too many ways to drown even if you don’t want to drown.”
― Charles Bukowski
tags: drowning, sad, thoughtful
8 likes

“The death of a social machine has never been heralded by a disharmony or a dysfunction; on the contrary, social machines make a habit of feeding on the contradictions they give rise to, on the crises they provoke, on the anxieties they engender, and on the infernal operations they regenerate. Capitalism has learned this, and has ceased doubting itself, while even socialists have abandoned belief in the possibility of capitalism's natural death by attrition. No one has ever died from contradictions. And the more it breaks down, the more it schizophrenizes, the better it works, the American way.”
― Gilles Deleuze, Anti-Oedipus: Capitalism and Schizophrenia
6 likes

BOOKSTAGRAM! — 2767 members — last activity 2 hours, 12 min ago
For all you Bookstagram people to connect with other bookstagrammers! Creators account: https://www.instagram.com/devin.reads/
More of Khyati’s groups…

Polls voted on by Khyati