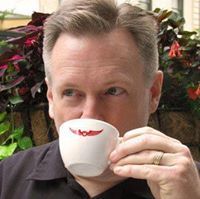 This will prevent Jon from sending you messages, friend request or from viewing your profile. They will not be notified. Comments on discussion boards from them will be hidden by default.
Sign in to Goodreads to learn more about Jon.

Jon Gabriel is currently reading
Way of the Ascetics: The Ancient Tradition of Discipline and Inner Growth
by Tito Colliander
bookshelves: currently-reading

Music: What Happened? by Scott Miller
4 highlights
Another difference from 1958 is that it would no longer occur to songwriters to glorify longing as an end in itself, let alone have the wherewithal to get it right in a universally accessible lyric.
See Jon Gabriel’s 17 books with notes and highlights…

“in the Age of Television, our information environment is completely different from what it was in 1783; that we have less to fear from government restraints than from television glut; that, in fact, we have no way of protecting ourselves from information disseminated by corporate America; and that, therefore, the battles for liberty must be fought on different terrains from where they once were.”
― Neil Postman, Amusing Ourselves to Death: Public Discourse in the Age of Show Business
0 likes

“I believe I am not mistaken in saying that Christianity is a demanding and serious religion. When it is delivered as easy and amusing, it is another kind of religion altogether.”
― Neil Postman, Amusing Ourselves to Death: Public Discourse in the Age of Show Business
tags: christianity, consumer-culture, religion
37 likes

“The Bill of Rights is largely a prescription for preventing government from restricting the flow of information and ideas. But the Founding Fathers did not foresee that tyranny by government might be superseded by another sort of problem altogether, namely, the corporate state, which through television now controls the flow of public discourse in America. I raise no strong objection to this fact (at least not here) and have no intention of launching into a standard-brand complaint against the corporate state. I merely note the fact with apprehension, as did George Gerbner, Dean of the Annenberg School of Communication, when he wrote:

Television is the new state religion run by a private Ministry of Culture (the three networks), offering a universal curriculum for all people, financed by a form of hidden taxation without representation. You pay when you wash, not when you watch, and whether or not you care to watch.

“He felt his hunger no longer as a pain but as a tide. He felt it rising in himself through time and darkness, rising through the centuries, and he knew that it rose in a line of men whose lives were chosen to sustain it, who would wander in the world, strangers from that violent country where the silence is never broken except to shout the truth. He felt it building from the blood of Abel to his own, rising and spreading in the night, a red-gold tree of fire ascended as if it would consume the darkness in one tremendous burst of flame. The boy’s breath went out to meet it. He knew that this was the fire that had encircled Daniel, that had raised Elijah from the earth, that had spoken to Moses and would in the instant speak to him. He threw himself to the ground and with his face against the dirt of the grave, he heard the command. GO WARN THE CHILDREN OF GOD OF THE TERRIBLE SPEED OF MERCY. The words were as silent as seed opening one at a time in his blood.”
― Flannery O'Connor, The Violent Bear It Away
13 likes

“Any asshole with a Masters in Social Work can put on a turban and start issuing fatwas about whom you can and whom you can't mail meat to, but it takes real balls to turn a brunette without a cranium into a blond.”
― Mark Leyner, The Tetherballs of Bougainville
1 likes

Polls voted on by Jon