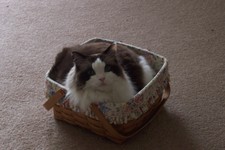 See all 222 books that Sarah is reading…

“Any librarian or scholar will tell you: Close is not the same as accurate.”
― Libba Bray, The Diviners
117 likes

“Shh! Listen! Someone’s coming! I think — I think it might be us!”
― J.K. Rowling, Harry Potter and the Prisoner of Azkaban
tags: hermione-granger, time-travel, time-turner
47 likes

“Children, don’t speak so coarsely,’ said Mr. Webster, who had a vague notion that some supervision should be exercised over his daughters’ speech, and that a line should be drawn, but never knew quite when to draw it. He had allowed his daughters to use his library without restraint, and nothing is more fatal to maidenly delicacy of speech than the run of a good library.”
― Robertson Davies, Tempest-Tost
6 likes

“Come here, cat. You wouldn’t want to destroy the space-time continuum, would you? Meow. Meow.”
― Connie Willis, To Say Nothing of the Dog
tags: cats, funny, time-travel
29 likes

Building a SciFi/Fantasy Library — 3552 members — last activity 19 hours, 53 min ago
Add your science-fiction or fantasy books to the list, but make sure it's not already there. . .no need for duplicate entries.

Carrie Ryan
author of: The Forest of Hands and Teeth

Patrick Rothfuss
author of: The Name of the Wind
More…