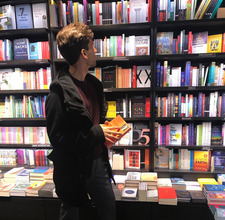 This will prevent Owayss from sending you messages, friend request or from viewing your profile. They will not be notified. Comments on discussion boards from them will be hidden by default.
Sign in to Goodreads to learn more about Owayss.

Owayss Kabtoul is currently reading
Streaming Systems: The What, Where, When, and How of Large-Scale Data Processing
by Tyler Akidau
bookshelves: currently-reading

Owayss Kabtoul is currently reading
The Art of Doing Science and Engineering: Learning to Learn
by Richard Hamming
bookshelves: currently-reading

See all 32 books that Owayss is reading…

“We are all refugees from our childhoods. And so we turn, among other things, to stories. To write a story, to read a story, is to be a refugee from the state of refugees. Writers and readers seek a solution to the problem that time passes, that those who have gone are gone and those who will go, which is to say every one of us, will go. For there was a moment when anything was possible. And there will be a moment when nothing is possible. But in between we can create.”
― Mohsin Hamid, How to Get Filthy Rich in Rising Asia
tags: adulthood, aging, childhood, creation, death, reading, refugees, stories, writing
140 likes

“We were all trapped in stories, she said, just as he used to say, his wavy hair, his naughty smile, his beautiful mind, each of us the prisoner of our own solipsistic narrative, each family the captive of the family story, each community locked within its own tale of itself, each people the victims of their own versions of history, and there were parts of the world where the narratives collided and went to war, where there were two or more incompatible stories fighting for space on, to speak, the same page.”
― Salman Rushdie, Two Years Eight Months and Twenty-Eight Nights
28 likes

“It is not that we have a short time to live, but that we waste a lot of it. Life is long enough, and a sufficiently generous amount has been given to us for the highest achievements if it were all well invested. But when it is wasted in heedless luxury and spent on no good activity, we are forced at last by death’s final constraint to realize that it has passed away before we knew it was passing. So it is: we are not given a short life but we make it short, and we are not ill-supplied but wasteful of it… Life is long if you know how to use it.”
― Seneca, On the Shortness of Life
87 likes

Syria Tech Books — 16 members — last activity Nov 19, 2017 10:55AM
This groups aims to build a virtual community in order to connect Syrian readers sharing their knowledge in computer science and technologies.

Stephen Hawking
author of: A Brief History of Time

Sam Harris
author of: Letter to a Christian Nation

Rebecca Goldstein
author of: 36 Arguments for the Existence of God: A Work of Fiction
More…

Polls voted on by Owayss