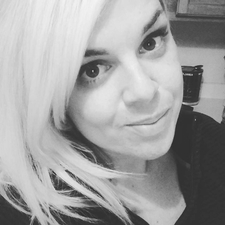 This will prevent Jenna from sending you messages, friend request or from viewing your profile. They will not be notified. Comments on discussion boards from them will be hidden by default.
Sign in to Goodreads to learn more about Jenna.

“If there is a life after this one, he said, let me meet you in it, James Carstairs.”
― Cassandra Clare, Clockwork Princess
tags: cassandra-clare, clockwork-princess, jem-carstairs, page-246, will-herondale
471 likes

“Some other facts I picked up:
Welsh is an actual, currently used language and our next-door neighbours Angela and Gaenor spoke it. It sounds like Wizard.
Baked beans are very popular in England. For breakfast. On toast. On baked potatoes. They can't get enough.
"American History" is not a subject everywhere.
England and Britain and the United Kingdom are not the same thing. England is the country. Britain is the island containing England, Scotland, and Wales. The United Kingdom is the formal designation of England, Scotland, Wales and Northern Ireland as a political entity.
If you mess this up, you will be corrected. Repeatedly.”
― Maureen Johnson, The Name of the Star

Polls voted on by Jenna