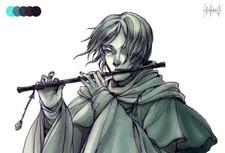 This will prevent Abram from sending you messages, friend request or from viewing your profile. They will not be notified. Comments on discussion boards from them will be hidden by default.
Sign in to Goodreads to learn more about Abram .

“As long as you gave everything you had and you didn't let it break you, it could never be considered a failure.”
― Merphy Napier, Perfection
tags: failure, success
56 likes

“Bel let her talk—as a matter of fact it would have been difficult to stop her—and there was no harm in listening as long as she did not allow herself to believe a word Louise was saying. It’s a dream, thought Bel. It’s a fairy-tale. Fairy-tales don’t happen.”
― D.E. Stevenson, Bel Lamington
2 likes

“Dr. Armstrong did not say much, but watched and listened with a good deal of interest. Like most doctors he had studied psychology and it seemed to him that it would be difficult to find two girls so utterly different in their outlook upon life. That was why they were so good for each other, he thought. Louise was used to having her own way and, apart from his professional duties which were sacred to him, he was perfectly willing that she should “arrange” his life. There was not a grain of selfishness in his beloved Lou; her arrangements were made for the benefit of others and were usually wise. Bel was different—utterly different, thought Dr. Armstrong. Life had dealt her some hard blows; she accepted the blows and made the best of it. She did not expect Fate to be kind.”
― D.E. Stevenson, Bel Lamington
2 likes

“When life ends it's like a book losing pages or a song skipping. It's abrupt and it doesn't make sense.”
― Benjamin Appleby-Dean, The Stickman's Legacy
tags: mortality, narrative, philosophy
4 likes

Polls voted on by Abram