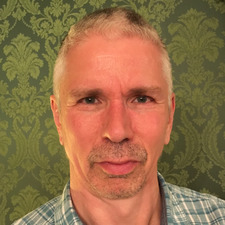 This will prevent Phil from sending you messages, friend request or from viewing your profile. They will not be notified. Comments on discussion boards from them will be hidden by default.
Sign in to Goodreads to learn more about Phil.

Humankind: A Hopeful History by Rutger Bregman
7 notes & 22 highlights
On one night in Dresden, more men, women and children were killed than in London during the whole war.
See Phil Ruse’s 96 books with notes and highlights…

“I like to think that it isn't weakness or evasion, but a final act of kindness, a stand against oblivion and despair, ...”
― Ian McEwan, Atonement
17 likes

“Why are the Fens flat? So God has a clear view...”
― Graham Swift, Waterland
3 likes

“I'm beginning to think that maybe it's not just how much you love someone. Maybe what matters is who you are when you're with them.”
― Anne Tyler, The Accidental Tourist
tags: inspirational, love
327 likes

“A person is, among all else, a material thing, easily torn and not easily mended.”
― Ian McEwan, Atonement
tags: vulnerability
1795 likes

“Sometimes at midnight, in the great silence of the sleep bound town, the doctor turned on his radio before going to bed for the few hours' sleep he allowed himself. And from the ends of the earth, across thousands of miles of land and sea, kindly, well-meaning speakers tried to voice their fellow-feeling, and indeed did so, but at the same time proved the utter incapacity of every man truly to share in the suffering that he cannot see. "Oran! Oran!" In vain the call rang over oceans, in vain Rieux listened hopefully; always the tide of eloquence began to flow, bringing home still more the unbridgeable gulf that lay between Grand and the speaker. "Oran, we're with you!" they called emotionally. But not, the doctor told himself, to love or to die together-- and that's the only way...”
― Albert Camus, La Peste | The Plague
16 likes

Polls voted on by Phil