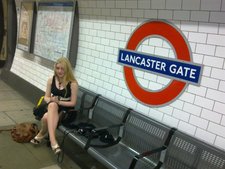 This will prevent Hanna from sending you messages, friend request or from viewing your profile. They will not be notified. Comments on discussion boards from them will be hidden by default.
Sign in to Goodreads to learn more about Hanna.

“I have these guilts about never having read Chaucer but I was talked out of learning Early Anglo-Saxon / Middle English by a friend who had to take it for her Ph.D. They told her to write an essay in Early Anglo-Saxon on any-subject-of-her-own-choosing. “Which is all very well,” she said bitterly, “but the only essay subject you can find enough Early Anglo-Saxon words for is ‘How to Slaughter a Thousand Men in a Mead Hall’.”
― Helene Hanff, 84, Charing Cross Road
43 likes

“If you have enough book space, I don't want to talk to you.”
― Terry Pratchett
tags: books, shelves
2856 likes

“It's been my experience that you can nearly always enjoy things if you make up your mind firmly that you will.”
― Lucy Maud Montgomery, Anne of Green Gables
tags: happiness
3910 likes

“It's not that I don't like people. It's just that when I'm in the company of others - even my nearest and dearest - there always comes a moment when I'd rather be reading a book.”
― Maureen Corrigan, Leave Me Alone, I'm Reading: Finding and Losing Myself in Books
tags: books, people, reading
1909 likes

Polls voted on by Hanna