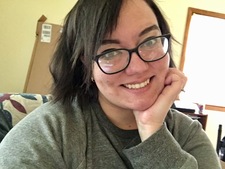 “It feels like a moment I've lived a thousand times before, as if everything is familiar, right up to the moment of my death, that it will happen again an infinite number of times, that we will meet, marry, have our children, succeed in the ways we have, fail in the ways we have, all exactly the same, always unable to change a thing. I am again at the bottom of an unstoppable wheel, and when I feel my eyes close for death, as they have and will a thousand times, I awake.”
― Jonathan Safran Foer, Everything Is Illuminated
6 likes

“Melinda Pratt rides city bus number twelve to her cello lesson, wearing her mother's jean jacket and only one sock. Hallo, world, says Minna. Minna often addresses the world, sometimes silently, sometimes out loud. Bus number twelve is her favorite place for watching, inside and out. The bus passes cars and bicycles and people walking dogs. It passes store windows, and every so often Minna sees her face reflection, two dark eyes in a face as pale as a winter dawn. There are fourteen people on the bus today. Minna stands up to count them. She likes to count people, telephone poles, hats, umbrellas, and, lately, earrings. One girl, sitting directly in front of Minna, has seven earrings, five in one ear. She has wisps of dyed green hair that lie like forsythia buds against her neck.

There are, Minna knows, a king, a past president of the United States, and a beauty queen on the bus. Minna can tell by looking. The king yawns and scratches his ear with his little finger. Scratches, not picks. The beauty queen sleeps, her mouth open, her hair the color of tomatoes not yet ripe. The past preside of the United States reads Teen Love and Body Builder's Annual.

Next to Minna, leaning against the seat, is her cello in its zippered canvas case. Next to her cello is her younger brother, McGrew, who is humming. McGrew always hums. Sometimes he hums sentences, though most often it comes out like singing. McGrew's teachers do not enjoy McGrew answering questions in hums or song. Neither does the school principal, Mr. Ripley. McGrew spends lots of time sitting on the bench outside Mr. Ripley's office, humming.

Minna smiles at her brother. He is small and stocky and compact like a suitcase. Minna loves him. McGrew always tells the truth, even when he shouldn't. He is kind. And he lends Minna money from the coffee jar he keeps beneath his mattress.

Minna looks out the bus window and thinks about her life. Her one life. She likes artichokes and blue fingernail polish and Mozart played too fast. She loves baseball, and the month of March because no one else much likes March, and every shade of brown she has ever seen. But this is only one life. Someday, she knows, she will have another life. A better one. McGrew knows this, too. McGrew is ten years old. He knows nearly everything. He knows, for instance, that his older sister, Minna Pratt, age eleven, is sitting patiently next to her cello waiting to be a woman.”
― Patricia MacLachlan, The Facts and Fictions of Minna Pratt

“I was examined yesterday,' he remarked at last. 'It was worth while undergoing the gêne of it to know that one was perfectly fit.'
Philip noticed that he still used a French word in an affected way when an English one would have served.”
― W. Somerset Maugham, Of Human Bondage
2 likes

“On a large enough time line, the survival rate for everyone will drop to zero.”
― Chuck Palahniuk, Fight Club
7 likes

“Why d’you read then?”
“Partly for pleasure, and because it’s a habit and I’m just as uncomfortable if I don’t read as if I don’t smoke, and partly to know myself. When I read a book I seem to read it with my eyes only, but now and then I come across a passage, perhaps only a phrase, which has a meaning for me, and it becomes part of me; I’ve got out of the book all that’s any use to me, and I can’t get anything more if I read it a dozen times. You see, it seems to me, one’s like a closed bud, and most of what one reads and does has no effect at all; but there are certain things that have a peculiar significance for one, and they open a petal; and the petals open one by one and at last the flower is there.”
― W. Somerset Maugham, Of Human Bondage
19 likes