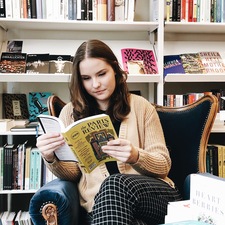 Iris (teawithdarcy) is currently reading
The Shepherd's Life: A Tale of the Lake District
by James Rebanks
bookshelves: currently-reading

See all 4 books that Iris (teawithdarcy) is reading…

“The half-circle of blinding turquoise ocean is this love’s primal scene. That this blue exists makes my life a remarkable one, just to have seen it. To have seen such beautiful things. To find oneself placed in their midst. Choiceless. I returned there yesterday and stood again upon the mountain.”
― Maggie Nelson, Bluets
tags: blue, bluets, colour, maggie-nelson, nelson
28 likes

“The word "landmark" is from the old English "landmearc", meaning 'an object in the landscape which, by its conspicuousness, serves as a guide in the direction of one's course.”
― Robert Macfarlane, Landmarks
tags: direction, landmark, nature, outdoors, path
2 likes

“Old books exert a strange fascination for me -- their smell, their feel, their history; wondering who might have owned them, how they lived, what they felt.”
― Lauren Willig
tags: history, old-books
61 likes

“What he longs for instead, as he sits at the food-strewn table, is winter, winter itself. He wants the essentiality of winter, not this half-season grey selfsameness. He wants real winter where woods are sheathed in snow, trees emphatic with its white, their bareness shining and enhanced because of it, the ground underfoot snow-covered as if with frozen feathers or shredded cloud but streaked with gold through the trees from low winter sun, and at the end of the barely discernible track, along the dip in the snow that indicates a muffled path between the trees, the view and the woods opening to a light that’s itself untrodden, never been blemished, wide like an expanse of snow-sea, above it more snow promised, waiting its time in the blank of the sky.”
― Ali Smith, Winter
tags: winter
5 likes

The Feminist Orchestra Bookclub — 4652 members — last activity Feb 17, 2020 06:18AM
Discover and recommend more feminist reads here: https://www.goodreads.com/list/show/96419.The_Feminist_Orchestra_Potential_Reading_List We're also on Discover and recommend more feminist reads here: https://www.goodreads.com/list/show/96419.The_Feminist_Orchestra_Potential_Reading_List We're also on twitter: https://twitter.com/femorchestra #feministorchestra Sick of sexist comments from people online and being accused of banging my 'feminist drum' by intolerant people I have decided to start a Feminist Bookclub on Booktube. All engagement is welcome though, on youtube, on blogs and on goodreads. This is not 'my' bookclub, however, it belongs to all of us. I strongly believe feminism, which means equality of all sexes in society, not to be about the individual but about everyone and to be a group movement. Therefore, I want this bookclub to be a group. We read one book over the course of two months throughout the year. At the end of the first month there will be a pre-scheduled twitter chat on themes relating to that month's book, which will not require you to have finished the book. A video review will then be posted on Jean (bookishthoughts) or Lauren's (readsanddaydreams) channel on youtube. If you also film a youtube review/discussion or write a review/discussion of the book on your blog please share it with us all by posting it in the reviews thread. Please use #feministorchestra on twitter, instagram and elsewhere so we can all share our posts, thoughts, discussion and book reviews Gender equality is at the heart of this book club so please recognise this in your behaviour. We do not exist to convince anyone of this but to discuss the nuances and individual issues presented by the literature we read. All fantastic name credit goes to Chelsea: https://www.youtube.com/channel/UCr5ozf3OVhcWVbr_f7ONJpw ...more

Anne Brontë
author of: The Tenant of Wildfell Hall

Polls voted on by Iris (teawithdarcy)