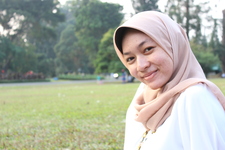 This will prevent Fadilla from sending you messages, friend request or from viewing your profile. They will not be notified. Comments on discussion boards from them will be hidden by default.
Sign in to Goodreads to learn more about Fadilla.

Fadilla Putri is currently reading
Anxiety: Meditations on the Anxious Mind
by The School of Life
bookshelves: currently-reading

“I'm in love with you," he said quietly.

"I am," he said. He was staring at me, and I could see the corners of his eyes crinkling. "I'm in love with you, and I'm not in the business of denying myself the simple pleasure of saying true things. I'm in love with you, and I know that love is just a shout into the void, and that oblivion is inevitable, and that we're all doomed and that there will come a day when all our labor has been returned to dust, and I know the sun will swallow the only earth we'll ever have, and I am in love with you.”
― John Green, The Fault in Our Stars
tags: doomed, inevitable, love, oblivion, pleasure, simple
24082 likes

Or better yet, date a girl who writes.”
― Rosemarie Urquico
18835 likes

“This is where it all begins. Everything starts here, today.”
― David Nicholls, One Day
tags: hope, love
2489 likes

“It is impossible to love and be wise.”
― Francis Bacon
124 likes

Emily Giffin
author of: Something Borrowed

Polls voted on by Fadilla