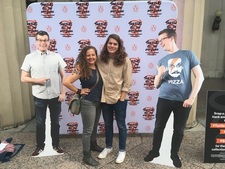 This will prevent Kim from sending you messages, friend request or from viewing your profile. They will not be notified. Comments on discussion boards from them will be hidden by default.
Sign in to Goodreads to learn more about Kim.

“White people desperately want to believe that only the lonely, isolated “whites only” club members are racist. This is why the word racist offends “nice white people” so deeply. It challenges their self-identification as good people. Sadly, most white people are more worried about being called racist than about whether or not their actions are in fact racist or harmful.”
― Austin Channing Brown, I'm Still Here: Black Dignity in a World Made for Whiteness
36 likes

“Tears don't always just fall; sometimes they rip through you, like storm-painted gusts instead of mere raindrops.”
― Saeed Jones, How We Fight For Our Lives
10 likes

“Whites, it must frankly be said, are not putting in a similar mass effort to reeducate themselves out of their racial ignorance. It is an aspect of their sense of superiority that the white people of America believe they have so little to learn.”
― Martin Luther King Jr., Where Do We Go from Here: Chaos or Community?
57 likes

“I ventured to believe that the function of the border wasn’t only to keep people out, at least that was not its long-term function. Its other purpose was to be visible, to be seen, to be carried in the imaginations of migrants deep into the interior of the country, in the interior of their minds. It was a spectacle meant to be witnessed by the world, and all of its death and violence was and continues to be a form of social control, the way that kings of the past needed to behead only one petty thief in the public square to quell thousands more.”
― Marcelo Hernandez Castillo, Children of the Land
2 likes

“A friend is one to whom one may pour out the contents of one's heart, chaff and grain together, knowing that gentle hands will take and sift it, keep what is worth keeping, and with a breath of kindness, blow the rest away.”
― Dinah Maria Craik
tags: acceptance, confidences, friends, misattributed
1104 likes

Polls voted on by Kim