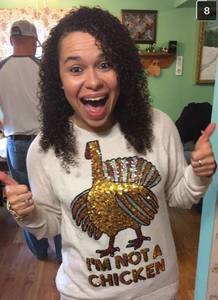 This will prevent Alexandra from sending you messages, friend request or from viewing your profile. They will not be notified. Comments on discussion boards from them will be hidden by default.
Sign in to Goodreads to learn more about Alexandra.

Alexandra is currently reading
Surviving the Angel of Death: The True Story of a Mengele Twin in Auschwitz
by Eva Mozes Kor
bookshelves: currently-reading

See all 38 books that Alexandra is reading…

Light from Other Stars by Erika Swyler
2 highlights
Your children were all your flaws shown to you in a way that made you love them: your worst made good.
See Alexandra’s 4 books with notes and highlights…

“Shame stuck to my sides, wherever I went, whatever I did. Shame was the reason I had locked myself away from the world and had severed contact with the people who had once been my friends. I couldn’t bear the thought of anyone I knew seeing the person I had become. A person who was angry, depressed, stupid, and lost.”
― Sarah Vallance, Prognosis: A Memoir of My Brain
0 likes

“To all who walk the dark path, and to those who walk in the sunshine but hold out a hand in the darkness to travel beside us: Brighter days are coming. Clearer sight will arrive. And you will arrive too. No, it might not be forever. The bright moments might be for a few days at a time, but hold on for those days. Those days are worth the dark.”
― Jenny Lawson, Furiously Happy: A Funny Book About Horrible Things
132 likes

“The best teachers impart knowledge through sleight of hand, like a magician.”
― Kate Betts, My Paris Dream: An Education in Style, Slang, and Seduction in the Great City on the Seine
1040 likes

“Do you know about the spoons? Because you should. The Spoon Theory was created by a friend of mine, Christine Miserandino, to explain the limits you have when you live with chronic illness. Most healthy people have a seemingly infinite number of spoons at their disposal, each one representing the energy needed to do a task. You get up in the morning. That’s a spoon. You take a shower. That’s a spoon. You work, and play, and clean, and love, and hate, and that’s lots of damn spoons … but if you are young and healthy you still have spoons left over as you fall asleep and wait for the new supply of spoons to be delivered in the morning. But if you are sick or in pain, your exhaustion changes you and the number of spoons you have. Autoimmune disease or chronic pain like I have with my arthritis cuts down on your spoons. Depression or anxiety takes away even more. Maybe you only have six spoons to use that day. Sometimes you have even fewer. And you look at the things you need to do and realize that you don’t have enough spoons to do them all. If you clean the house you won’t have any spoons left to exercise. You can visit a friend but you won’t have enough spoons to drive yourself back home. You can accomplish everything a normal person does for hours but then you hit a wall and fall into bed thinking, “I wish I could stop breathing for an hour because it’s exhausting, all this inhaling and exhaling.” And then your husband sees you lying on the bed and raises his eyebrow seductively and you say, “No. I can’t have sex with you today because there aren’t enough spoons,” and he looks at you strangely because that sounds kinky, and not in a good way. And you know you should explain the Spoon Theory so he won’t get mad but you don’t have the energy to explain properly because you used your last spoon of the morning picking up his dry cleaning so instead you just defensively yell: “I SPENT ALL MY SPOONS ON YOUR LAUNDRY,” and he says, “What the … You can’t pay for dry cleaning with spoons. What is wrong with you?” Now you’re mad because this is his fault too but you’re too tired to fight out loud and so you have the argument in your mind, but it doesn’t go well because you’re too tired to defend yourself even in your head, and the critical internal voices take over and you’re too tired not to believe them. Then you get more depressed and the next day you wake up with even fewer spoons and so you try to make spoons out of caffeine and willpower but that never really works. The only thing that does work is realizing that your lack of spoons is not your fault, and to remind yourself of that fact over and over as you compare your fucked-up life to everyone else’s just-as-fucked-up-but-not-as-noticeably-to-outsiders lives. Really, the only people you should be comparing yourself to would be people who make you feel better by comparison. For instance, people who are in comas, because those people have no spoons at all and you don’t see anyone judging them. Personally, I always compare myself to Galileo because everyone knows he’s fantastic, but he has no spoons at all because he’s dead. So technically I’m better than Galileo because all I’ve done is take a shower and already I’ve accomplished more than him today. If we were having a competition I’d have beaten him in daily accomplishments every damn day of my life. But I’m not gloating because Galileo can’t control his current spoon supply any more than I can, and if Galileo couldn’t figure out how to keep his dwindling spoon supply I think it’s pretty unfair of me to judge myself for mine. I’ve learned to use my spoons wisely. To say no. To push myself, but not too hard. To try to enjoy the amazingness of life while teetering at the edge of terror and fatigue.”
― Jenny Lawson, Furiously Happy: A Funny Book About Horrible Things
167 likes

“most of my favorite people are dangerously fucked up but you’d never guess it because we’ve either become adept at hiding it or we’ve learned to bare it so honestly that it becomes the new normal. There’s a quote from The Breakfast Club that goes “We’re all pretty bizarre. Some of us are just better at hiding it.” I have it on a poster but I took a Sharpie to it and scratched out the word “hiding” because it reminds me that there’s a certain pride and freedom that comes from wearing your unique bizarreness like a badge of honor.”
― Jenny Lawson, Furiously Happy: A Funny Book About Horrible Things
78 likes

Books that Exceeded your Expectations

Polls voted on by Alexandra