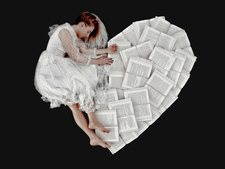 “I guess that's how they were able to do it, in the way they did it, all at once, without anyone knowing beforehand. If there had still been portable money, it would have been more difficult.
It was after the catastrophe, when they shot the president and machine-gunned the Congress and the army declared a state of emergency. They blamed it on the Islamic fanatics at the time.
I was stunned. Everyone was, I know that. It was hard to believe, the entire government gone like that. How did they get in, how did it happen?
That was when they suspended the Constitution. They said it would be temporary. There wasn't even any rioting in the streets. People stayed home at night, watching television, looking for some direction. There wasn't even an enemy you could put your finger on.”
― Margaret Atwood, The Handmaid's Tale

“His gaze widened, then taking in the entirety of the camp. All these people: they were trapped. And not merely by the wires that surrounded them. Physical barricades were nothing compared to the wires of the mind. What had truly imprisoned them was one another. Husbands and wives, parents and children, friends and companions: what they believed had given them strength in their lives had actually done the opposite. Guilder recalled the couple who lived across the street from his townhouse, trading off their sleeping daughter on the way to the car. How heavy that burden must have felt in their arms. And when the end swept down upon them all, they would exit the world on a wave of suffering, their agonies magnified a million times over by the loss of her. Would they have to watch her die? Would they perish first, knowing what would become of her in their absence? Which was preferable? But the answer was neither. Love had sealed their doom. Which was what love did.”
― Justin Cronin, The Twelve
4 likes

“There's a fine line between genius and insanity. I have erased this line.”
― Oscar Levant
tags: genius, humor, insanity
9769 likes

“We were a society dying, said Aunt Lydia, of too much choice.”
― Margaret Atwood, The Handmaid's Tale
tags: life
5 likes

“Murtaugh Allsbrook and his riders spread the news like wildfire. Down every road, over every river, to the north and south and west, through snow and rain and mist, their hooves churning up the dust of each kingdom.
And for every town they told, every tavern and secret meeting, more riders went out.
More and more, until there was not a road they had not covered, until there was not one soul who did not know that Aelin Galathynius was alive—and willing to stand against Adarlan.
Across the White Fangs and the Ruhnns, all the way to the Western Wastes and the red-haired queen who ruled from a crumbling castle. To the Deserted Peninsula and the oasis-fortress of the Silent Assassins. Hooves, hooves, hooves, echoing through the continent, sparking against the cobblestones, all the way to Banjali and the river-front palace of the King and Queen of Eyllwe, still in their midnight mourning clothes.
Hold on, the riders told the world.
Hold on.”
― Sarah J. Maas, Heir of Fire
tags: aelin-galathynius
19 likes