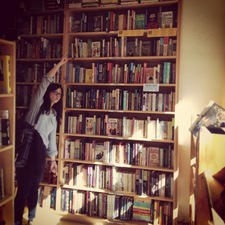 This will prevent Kelly from sending you messages, friend request or from viewing your profile. They will not be notified. Comments on discussion boards from them will be hidden by default.
Sign in to Goodreads to learn more about Kelly.

Kelly is currently reading
What the Dog Saw: And Other Adventures
by Malcolm Gladwell
bookshelves: currently-reading

See all 6 books that Kelly is reading…

“I love the way that each book—any book—is its own journey. You open it, and off you go….”
― Sharon Creech
tags: books
1085 likes

“Girls say to me, very reasonably, 'why isn't it a bunch of girls? Why did you write this about a bunch of boys?' Well, my reply is I was once a little boy - I have been a brother, a father, I am going to be a grandfather. I have never been a sister, or a mother, or a grandmother. That's one answer. Another answer is of course to say that if you - as it were - scaled down human beings, scaled down society, if you land with a group of little boys, they are more ike a scaled-down version of society than a group of little girls would be. Don't ask me why, and this is a terrible thing to say because I'm going to be chased from hell to breakfast by all the women who talk about equality - this is nothing to do with equality at all. I think women are foolish to pretend they are equal to men, they are far superior and always have been. But one thing you can't do with them is take a bunch of them and boil them down, so to speak, into a set of little girls who would then become a kind of image of civilisation, of society. The other thing is - why aren't they little boys AND little girls? Well, if they'd been little boys and little girls, we being who we are, sex would have raised its lovely head, and I didn't want this to be about sex. Sex is too trivial a thing to get in with a story like this, which was about the problem of evil and the problem of how people are to live together in a society, not just as lovers or man and wife.”
― William Golding
tags: children, civilisation, equality, life-experience, lord-of-the-flies, men, microcosms, sex, society, women
46 likes

“Wasn’t friendship its own miracle, the finding of another person who made the entire lonely world seem somehow less lonely?”
― Hanya Yanagihara, A Little Life
697 likes

Polls voted on by Kelly