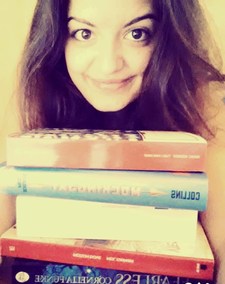 This will prevent Simona from sending you messages, friend request or from viewing your profile. They will not be notified. Comments on discussion boards from them will be hidden by default.
Sign in to Goodreads to learn more about Simona.

“She was pure, it was true, as he had never dreamed of purity; but cherries stained her lips.”
― Jack London, Martin Eden
tags: love, purity
3 likes

“I'm forty-nine, not fifteen, and I've made my peace with myself. Had I been handsome and stupid when I was fifteen, or twenty-one, as, at that time in life, I wished I had been, I would undoubtedly now no longer be handsome--but I'd still be stupid. So, in the long run, I've won out.”
― Isaac Asimov, Nemesis
tags: age, beauty, intelligence
1 likes

“Who is Mr. Jasper?"
Rosa turned aside her head in answering: "Eddy's uncle, and my music-master."
"You do not love him?"
"Ugh!" She put her hands up to her face, and shook with fear or horror.
"You know that he loves you?"
"O, don't, don't, don't!" cried Rosa, dropping on her knees, and clinging to her new resource. "Don't tell me of it! He terrifies me. He haunts my thoughts, like a dreadful ghost. I feel that I am never safe from him. I feel as if he could pass in through the wall when he is spoken of." She actually did look round, as if she dreaded to see him standing in the shadow behind her.
"Try to tell me more about it, darling."
"Yes, I will, I will. Because you are so strong. But hold me the while, and stay with me afterwards."
"My child! You speak as if he had threatened you in some dark way."
"He has never spoken to me about - that. Never."
"What has he done?"
"He has made a slave of me with his looks. He has forced me to understand him, without his saying a word; and he has forced me to keep silence, without his uttering a threat. When I play, he never moves his eyes from my hands. When I sing, he never moves his eyes from my lips. When he corrects me, and strikes a note, or a chord, or plays a passage, he himself is in the sounds, whispering that he pursues me as a lover, and commanding me to keep his secret. I avoid his eyes, but he forces me to see them without looking at them. Even when a glaze comes over them (which is sometimes the case), and he seems to wander away into a frightful sort of dream in which he threatens most, he obliges me to know it, and to know that he is sitting close at my side, more terrible to me than ever."
"What is this imagined threatening, pretty one? What is threatened?"
"I don't know. I have never even dared to think or wonder what it is."
"And was this all, to-night?"
"This was all; except that to-night when he watched my lips so closely as I was singing, besides feeling terrified I felt ashamed and passionately hurt. It was as if he kissed me, and I couldn't bear it, but cried out. You must never breathe this to any one. Eddy is devoted to him. But you said to-night that you would not be afraid of him, under any circumstances, and that gives me - who am so much afraid of him - courage to tell only you. Hold me! Stay with me! I am too frightened to be left by myself.”
― Charles Dickens, The Mystery of Edwin Drood

“Caring was a thing with claws. It sank them in, and didn’t let go. Caring hurt more than a knife to the leg, more than a few broken ribs, more than anything that bled or broke and healed again. Caring didn’t break you clean. It was a bone that didn’t set, a cut that wouldn’t close.”
― V.E. Schwab, A Conjuring of Light
tags: affection, caring, delilah-bard, hurting, love
270 likes

READING
CHALLENGE
Simona B has read 24 books of her goal of 1!
2400%
View Books
View more

Franz Kafka
author of: The Metamorphosis

Most Anticipated Books of 2017

The MOVIE was BETTER than the BOOK

Polls voted on by Simona