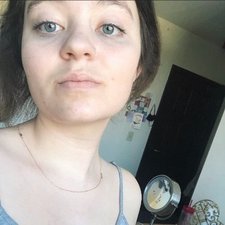 This will prevent Elle from sending you messages, friend request or from viewing your profile. They will not be notified. Comments on discussion boards from them will be hidden by default.
Sign in to Goodreads to learn more about Elle.

Elle (ellexamines) said: " I’ll be so honest. I want to hit the off switch on my brain for a few hours and just vibe. I think reading books in the infernal devices universe will enable me to do so. I am fucking crazy but I am free "

Elle (ellexamines) said: " I know I’m going to cry reading this and I’ve accepted that fate "

“It’s ridiculous the way everyone acts like killing a king is going to make someone better at being one,” Vivi says. “Imagine if, in the mortal world, a lawyer passed the bar by killing another lawyer.”
― Holly Black, The Queen of Nothing
87 likes

“I want to meet you in every place I ever loved. Listen to me. I am your echo. I would rather break the world than lose you.”
― Amal El-Mohtar, This Is How You Lose the Time War
105 likes

“I think a lot about queer villains, the problem and pleasure and audacity of them. I know I should have a very specific political response to them. I know, for example, I should be offended by Disney’s lineup of vain, effete ne’er-do-wells (Scar, Jafar), sinister drag queens (Ursula, Cruella de Vil), and constipated, man-hating power dykes (Lady Tremaine, Maleficent). I should be furious at Downton Abbey’s scheming gay butler and Girlfriend’s controlling, lunatic lesbian, and I should be indignant about Rebecca and Strangers on a Train and Laura and The Terror and All About Eve, and every other classic and contemporary foppish, conniving, sissy, cruel, humorless, depraved, evil, insane homosexual on the large and small screen. And yet, while I recognize the problem intellectually—the system of coding, the way villainy and queerness became a kind of shorthand for each other—I cannot help but love these fictional queer villains. I love them for all of their aesthetic lushness and theatrical glee, their fabulousness, their ruthlessness, their power. They’re always by far the most interesting characters on the screen. After all, they live in a world that hates them. They’ve adapted; they’ve learned to conceal themselves. They’ve survived.”
― Carmen Maria Machado, In the Dream House
31 likes

“I have built a you within me, or you have. I wonder what of me there is in you.”
― Amal El-Mohtar, This Is How You Lose the Time War
68 likes

“I want to meet you in every place I have loved.”
― Amal El-Mohtar, This Is How You Lose the Time War
114 likes

Benjamin Alire Sáenz
author of: Aristotle and Dante Discover the Secrets of the Universe
More…

Polls voted on by Elle