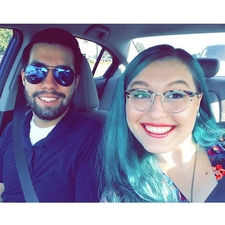 This will prevent Meagan from sending you messages, friend request or from viewing your profile. They will not be notified. Comments on discussion boards from them will be hidden by default.
Sign in to Goodreads to learn more about Meagan.

Meagan is currently reading
The Girl and the Stars (Book of the Ice, #1)
by Mark Lawrence (Goodreads Author)
bookshelves: currently-reading

“He would recognize this later as the moment his center of gravity shifted: from being one of one—a pillar alone, apart—to being half of something that would fall if either side were cut away.”
― Laini Taylor, Strange the Dreamer
tags: love
4 likes

“She wept, and Lazlo drew her into an embrace as though it were the most natural thing in the world that he should draw a mournful goddess against his shoulder, enfold her in his arms, breathe the scent of the flowers in her hair, and even lightly stroke her temple with the edge of his thumb. And though there was a layer of his mind that knew this was a dream, it was momentarily shuffled under by other, more compelling layers, and he experienced the moment as though it were absolutely real. All the emotion, all the sensation. The texture of her skin, the scent of her hair, the heat of her breath through his linen shirt, and even the moisture of tears seeping through it. But far more intense was the utter, ineffable tenderness he felt, and the solemnity. As though he had been entrusted with something infinitely precious. As though he had taken an oath, and his very life stood surety to it. He would recognize this later as the moment his center of gravity shifted: from being one of one—a pillar alone, apart—to being half of something that would fall if either side were cut away.”
― Laini Taylor, Strange the Dreamer
4 likes

“People are always saying these things about how there's no need to read literature anymore-that it won't help the world. Everyone should apparently learn to speak Mandarin, and learn how to write code for computers. More young people should go into STEM fields: science, technology, engineering, and math. And that all sounds to be true and reasonable. But you can't say that what you learn in English class doesn't matter. That great writing doesn't make a difference. I'm different. It's hard to put into words, but it's true. Words matter.”
― Meg Wolitzer
tags: importance-of-literature, literature, reading, words
5 likes

Polls voted on by Meagan