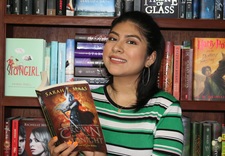 This will prevent Lupe from sending you messages, friend request or from viewing your profile. They will not be notified. Comments on discussion boards from them will be hidden by default.
Sign in to Goodreads to learn more about Lupe.

“My closet!" hissed the figure. A spiderlike hand darted out and grabbed the doorknob. "My closet! Mine!" And it slammed the door with a bang.”
― Julie Kagawa, The Iron King
tags: faeries, julie-kagawa, the-iron-king
249 likes

“His breath hitched, and he regarded me hungrily. “You’re playing with fire, you know that?”
“That’s weird, considering you’re an ice prin—” I didn’t get any further, as Ash leaned in and kissed me.”
― Julie Kagawa, Winter's Passage
tags: ash, love, meghan
613 likes

“Knock, knock!" he called in a high, singsong voice.
For a moment, silence. Then a thud and a crash, as if something heavy had been hurled at the door. "Go away!" snarled the voice from within.
"Ah, no. That's not how the joke goes," called Rob. "I say 'knock, knock', and you're supposed to answer with 'who's there?'"
"Fuck off!"
Nope, that's still wrong." Robbie seemed unperturbed. I, however, was horrified at Ethan's language, though I knew it wasn't him. "Here," continued Rob in an amiable voice, "I'll go through the whole thing, so you'll know how to answer next time." He cleared his throat and pounded at the door again. "Knock, knock!" he bellowed. "Who's there? Puck! Puck who? Puck, who will turn you into a squealing pig and stuff you in the oven if you don't get out of our way!" And with that, he banged the door open.”
― Julie Kagawa, The Iron King

“Bravo," said Grimalkin, peering down from Cold Tom's chest. "The Winter prince and Oberon's jester agreeing on something. The world must be ending.”
― Julie Kagawa, The Iron King
tags: humor
906 likes

Owls Be Reading — 139 members — last activity May 13, 2019 03:11AM
A book club that features an array of genres! Monthly pick will be announced the month before!

Polls voted on by Lupe