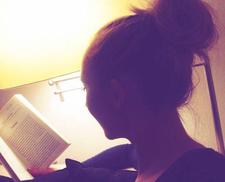 This will prevent Neja bere from sending you messages, friend request or from viewing your profile. They will not be notified. Comments on discussion boards from them will be hidden by default.
Sign in to Goodreads to learn more about Neja bere.

The Songs of Us by Emma Cooper
4 highlights
‘Our life – no matter what happens in between – starts and ends with a heartbeat: our own personal rhythm, our own song’
See Neja bere’s 3 books with notes and highlights…

“Maybe i´ll want to run again, and again, and eventually i´ll end up back by those old tracks, because there is nowhere left to go. Maybe. Maybe not. You have to take the risk, don´t you?”
― Paula Hawkins, The Girl on the Train
tags: thegirlonthetrain
0 likes

“We are like chess players who are trying to predict the opponent’s future moves, but in this case, we are dealing with life itself. True masters do not play the game on a single chessboard, but on multiple chessboards at the same time. And what’s the difference between grandmasters and masters? Surprises. The moves that cannot be predicted by the opponent. Life can play a simultaneous game with seven billion people at the same time and it can take each and every one of us by surprise. And we still believe we are capable of winning, because we can predict three of four moves ahead. We are insignificant.”
― Jaka Tomc, 720 Heartbeats
tags: chess, life, surprises
2 likes

Kim ~ It’s All About the Thrill

Polls voted on by Neja bere