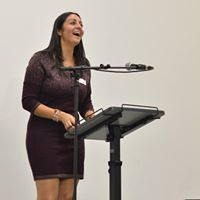 This will prevent Amber from sending you messages, friend request or from viewing your profile. They will not be notified. Comments on discussion boards from them will be hidden by default.
Sign in to Goodreads to learn more about Amber.

Amber Gilbert is currently reading
Crazy Faith: It's Only Crazy Until It Happens
by Michael Todd
bookshelves: currently-reading

“Power is in tearing human minds to pieces and putting them together again in new shapes of your own choosing.”
― George Orwell, 1984
1602 likes

“It was possible, no doubt, to imagine a society in which wealth, in the sense of personal possessions and luxuries, should be evenly distributed, while power remained in the hands of a small privileged caste. But in practice such a society could not long remain stable. For if leisure and security were enjoyed by all alike, the great mass of human beings who are normally stupefied by poverty would become literate and would learn to think for themselves; and when once they had done this, they would sooner or later realise that the privileged minority had no function, and they would sweep it away. In the long run, a hierarchical society was only possible on a basis of poverty and ignorance.”
― George Orwell, 1984
tags: dystopia, fear-of-the-future, inequality, poverty, society
372 likes

“If you want a picture of the future, imagine a boot stamping on a human face—for ever.”
― George Orwell, 1984
tags: future
2580 likes

“Now I will tell you the answer to my question. It is this. The Party seeks power entirely for its own sake. We are not interested in the good of others; we are interested solely in power, pure power. What pure power means you will understand presently. We are different from the oligarchies of the past in that we know what we are doing. All the others, even those who resembled ourselves, were cowards and hypocrites. The German Nazis and the Russian Communists came very close to us in their methods, but they never had the courage to recognize their own motives. They pretended, perhaps they even believed, that they had seized power unwillingly and for a limited time, and that just around the corner there lay a paradise where human beings would be free and equal. We are not like that. We know that no one ever seizes power with the intention of relinquishing it. Power is not a means; it is an end. One does not establish a dictatorship in order to safeguard a revolution; one makes the revolution in order to establish the dictatorship. The object of persecution is persecution. The object of torture is torture. The object of power is power. Now you begin to understand me.”
― George Orwell, 1984
tags: power
1855 likes

Polls voted on by Amber