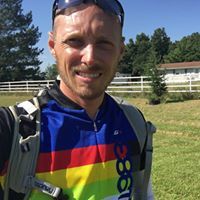 Matt McMahand is currently reading
True to Form: How to Use Foundation Training for Sustained Pain Relief and Everyday Fitness
by Eric Goodman
bookshelves: currently-reading

“The only thing that I see that is distinctly different about me is I'm not afraid to die on a treadmill. I will not be out-worked, period. You might have more talent than me, you might be smarter than me, you might be sexier than me, you might be all of those things you got it on me in nine categories. But if we get on the treadmill together, there's two things: You're getting off first, or I'm going to die. It's really that simple, right?
You're not going to out-work me. It's such a simple, basic concept. The guy who is willing to hustle the most is going to be the guy that just gets that loose ball. The majority of people who aren't getting the places they want or aren't achieving the things that they want in this business is strictly based on hustle. It's strictly based on being out-worked; it's strictly based on missing crucial opportunities. I say all the time if you stay ready, you ain't gotta get ready.”
― Will Smith
204 likes

“Nothing in this world can take the place of persistence. Talent will not; nothing is more common than unsuccessful men with talent. Genius will not; unrewarded genius is almost a proverb. Education will not; the world is full of educated derelicts. Persistence and determination alone are omnipotent. The slogan Press On! has solved and always will solve the problems of the human race.”
― Calvin Coolidge
tags: attitude, attributed-no-source, determination, persistence
1033 likes