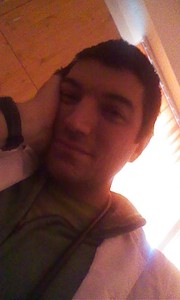 This will prevent Tudor from sending you messages, friend request or from viewing your profile. They will not be notified. Comments on discussion boards from them will be hidden by default.
Sign in to Goodreads to learn more about Tudor.

Tudor Ciocarlie is currently reading
The Science of Roman History: Biology, Climate, and the Future of the Past
by Walter Scheidel
bookshelves: roman-empire, currently-reading

See all 8 books that Tudor is reading…

“Truth had never been a priority. If believing a lie kept the genes proliferating, the system would believe that lie with all its heart.”
― Peter Watts, Echopraxia
16 likes

“Morning is wonderful. Its only drawback is that it comes at such an inconvenient time of day.”
― Glen Cook, Sweet Silver Blues
tags: morning, waking-up
2829 likes

“Isn't it nice to think that tomorrow is a new day with no mistakes in it yet?”
― L.M. Montgomery
tags: beginnings, fresh-start, inspirational, mistake, mistakes, new-day, start-over, tomorrow
8710 likes

“Fifty thousand years ago there were these three guys spread out across the plain and they each heard something rustling in the grass. The first one thought it was a tiger, and he ran like hell, and it was a tiger but the guy got away. The second one thought the rustling was a tiger and he ran like hell, but it was only the wind and his friends all laughed at him for being such a chickenshit. But the third guy thought it was only the wind, so he shrugged it off and the tiger had him for dinner. And the same thing happened a million times across ten thousand generations - and after a while everyone was seeing tigers in the grass even when there were`t any tigers, because even chickenshits have more kids than corpses do. And from those humble beginnings we learn to see faces in the clouds and portents in the stars, to see agency in randomness, because natural selection favours the paranoid. Even here in the 21st century we can make people more honest just by scribbling a pair of eyes on the wall with a Sharpie. Even now we are wired to believe that unseen things are watching us.”
― Peter Watts, Echopraxia
34 likes

“It is a great thing to start life with a small number of really good books which are your very own.”
― Arthur Conan Doyle
tags: books, humor
4128 likes

Catherynne M. Valente
author of: The Girl Who Circumnavigated Fairyland in a Ship of Her Own Making

Polls voted on by Tudor