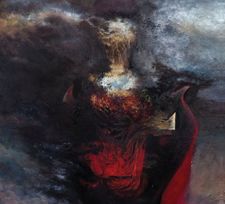 This will prevent Uxküll from sending you messages, friend request or from viewing your profile. They will not be notified. Comments on discussion boards from them will be hidden by default.
Sign in to Goodreads to learn more about Uxküll.

Uxküll is currently reading
Twilight of the Idols / The Anti-Christ
by Friedrich Nietzsche
bookshelves: currently-reading

See all 5 books that Uxküll is reading…

“I felt as though the vessel if my suffering had become empty, as if nothing could interest me now. I had lost even the ability to suffer.”
― Osamu Dazai, No Longer Human
tags: apathy, despair, melancholia, mourning, suffering
14 likes

“Genuine polemics approach a book as lovingly as a cannibal spices a baby.”
― Walter Benjamin, One Way Street And Other Writings
tags: books, comedic, polemics
2 likes

“I do not admire the excess of a virtue like courage unless I see at the same time an excess of the opposite virtue, as in Epaminondas, who possessed extreme courage and extreme kindness. We show greatness not by being at one extreme, but by touching both at once and occupying all the space in between.”
― Blaise Pascal, Pensées
tags: ancient-greece, france, philosophy, tension, virtue, virtues
3 likes

“All the authorities, however, agree as to the following facts:—that until the third day after Hephaestion’s death, Alexander neither tasted food nor paid any attention to his personal appearance, but lay on the ground either bewailing or silently mourning; that he also ordered a funeral pyre to be prepared for him in Babylon at the expense of 10,000 talents; some say at a still greater cost; that a decree was published throughout all the barbarian territory for the observance of a public mourning. Many of Alexander’s Companions dedicated themselves and their arms to the dead Hephaestion in order to show their respect to him; and the first to begin the artifice was Eumenes, whom we a short time ago mentioned as having been at variance with him. This he did that Alexander might not think he was pleased at Hephaestion’s death. Alexander did not appoint any one else to be commander of the Companion cavalry in the place of Hephaestion, so that the name of that general might not perish from the brigade; but that division of cavalry was still called Hephaestion’s and the figure made from Hephaestion went in front of it.”
― Arrian, The Campaigns of Alexander
1 likes

Martin Heidegger
author of: Being and Time

The Most Influential Books

Polls voted on by Uxküll