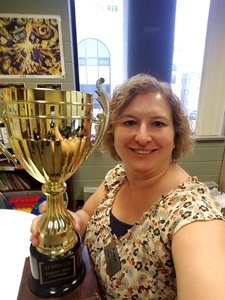 This will prevent Angie from sending you messages, friend request or from viewing your profile. They will not be notified. Comments on discussion boards from them will be hidden by default.
Sign in to Goodreads to learn more about Angie.

“Well, that is the oddest way to run a government I have ever heard of,” September said stubbornly. “It’s just absurd to elect a leader with a race or a chase or a hunt for a heart!” “What’s an ‘elect’?” asked Hushnow, the Ancient and Demented Raven Lord. “It’s how we decide who’s in charge where I come from. Everyone in the whole country votes for the President and the man who gets the most votes wins.” A chorus of gasps went up from the club. Madame Tanaquill held a handkerchief over her mouth. “That’s ghastly!” cried the Hushnow, the Ancient and Demented Raven Lord. “What if everyone chooses the wrong man?” gawped Pinecrack. “And if it’s always a man and never a moose or an octopus or a spriggan I think that’s just obscene, and prejudiced, and you ought to leave right now.” September frowned. “Well, sometimes people do. But it’s only for a few years, and then there’s another election.” The Rex Tyrannosaur looked nauseous. “Quite, quite horrid,” he whispered.”
― Catherynne M. Valente, The Girl Who Raced Fairyland All the Way Home
6 likes

“Endings are rubbish. No such thing. Never has been, never will be. There is only the place where you choose to stop talking. Everything else goes on forever.”
― Catherynne M. Valente, The Girl Who Raced Fairyland All the Way Home
15 likes

Polls voted on by Angie