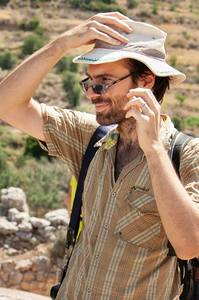 This will prevent Dimitris from sending you messages, friend request or from viewing your profile. They will not be notified. Comments on discussion boards from them will be hidden by default.
Sign in to Goodreads to learn more about Dimitris.

Dimitris Hall is currently reading
Magicians of the Gods: The forgotten wisdom of earth's lost civilisation - the sequel to Fingerprints of the Gods
by Graham Hancock (Goodreads Author)
bookshelves: currently-reading

See all 34 books that Dimitris is reading…

The Book of the Damned by Charles Fort
4 highlights
That the new that has displaced the old will itself some day be displaced; that it, too, will be recognized as myth-stuff—

“Nobody likes being alone that much. I don't go out of my way to make friends, that's all. It just leads to disappointment. ”
― Haruki Murakami, Norwegian Wood
tags: disappointment, friends, friendship, life, loneliness
5251 likes

“I don't think most people would like my personality. There might be a few--very few, I would imagine--who are impressed by it, but only rarely would anyone like it. Who in the world could possibly have warm feelings, or something like them, for a person who doesn't compromise, who instead, whenever a problem crops up, locks himself away alone in a closet? But is it ever possible for a professional writer to be liked by people? I have no idea. Maybe somewhere in the world it is. It's hard to generalize. For me, at least, I've written novels over many years, I just can't picture someone liking me on a personal level. Being disliked by someone, hated and despised, somehow seems more natural. Not that I'm relieved when that happens. Even I'm not happy when someone dislikes me.”
― Haruki Murakami, What I Talk About When I Talk About Running
72 likes

“Life is not so idiotically mathematical that only the big eat the small; it is just as common for a bee to kill a lion or at least to drive it mad.”
― August Strindberg, Miss Julie
1697 likes

“One the one hand, our economists treat human beings as rational actors making choices to maximize their own economic benefit. On the other hand, the same companies that hire those economists also pay for advertising campaigns that use the raw materials of myth and magic to encourage people to act against their own best interests, whether it's a matter of buying overpriced fizzy sugar water or the much more serious matter of continuing to support the unthinking pursuit of business as usual in the teeth of approaching disaster.”
― John Michael Greer, The Long Descent: A User's Guide to the End of the Industrial Age
tags: advertising, economics, myth, peak-oil
27 likes

Steve Taylor
author of: The Leap: The Psychology of Spiritual Awakening

Apostolos Doxiadis
author of: Logicomix: An Epic Search for Truth

Erik Davis
author of: Book of Lies: The Disinformation Guide to Magick and the Occult
More…

Polls voted on by Dimitris