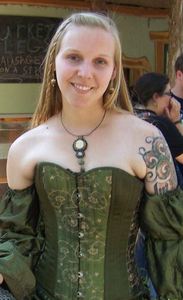 This will prevent Samantha from sending you messages, friend request or from viewing your profile. They will not be notified. Comments on discussion boards from them will be hidden by default.
Sign in to Goodreads to learn more about Samantha.

“If you want to test cosmetics, why do it on some poor animal who hasn't done anything? They should use prisoners who have been convicted of murder or rape instead. So, rather than seeing if perfume irritates a bunny rabbit's eyes, they should throw it in Charles Manson's eyes and ask him if it hurts.”
― Ellen DeGeneres, My Point... And I Do Have One
tags: animal-cruelty, animal-rights, animal-testing, animal-welfare, animals, cosmetics, ethics, prisoners, vegan, veganism
1213 likes

“Magic is desire made real.”
― Deborah Harkness, A Discovery of Witches
90 likes

“Do not pity the dead, Harry. Pity the living, and, above all those who live without love.”
― J.K. Rowling, Harry Potter and the Deathly Hallows
tags: live-death-love
19349 likes

1. The right to not read

2. The right to skip pages

3. The right to not finish

4. The right to reread

5. The right to read anything

6. The right to escapism

7. The right to read anywhere

8. The right to browse

9. The right to read out loud

10. The right to not defend your tastes”
― Daniel Pennac

“Thanksgiving dinner's sad and thankless. Christmas dinner's dark and blue. When you stop and try to see it From the turkey's point of view.

Sunday dinner isn't sunny. Easter feasts are just bad luck. When you see it from the viewpoint of a chicken or a duck. Oh how I once loved tuna salad Pork and lobsters, lamb chops too Till I stopped and looked at dinner From the dinner's point of view.”
― Shel Silverstein
tags: empathy, food, food-for-thought, vegetarianism
175 likes

Marion Nestle
author of: What to Eat

Polls voted on by Samantha