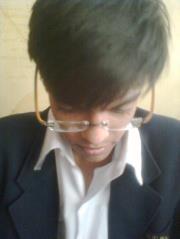 This will prevent Anurag from sending you messages, friend request or from viewing your profile. They will not be notified. Comments on discussion boards from them will be hidden by default.
Sign in to Goodreads to learn more about Anurag.

“Dear Madam Vorsoisson, I am sorry.
This is the eleventh draft of this letter. They’ve all started with those three words, even the horrible version in rhyme, so I guess they stay.
You once asked me never to lie to you. All right, so. I’ll tell you the truth now even if it isn’t the best or cleverest thing, and not abject enough either.
I tried to be the thief of you, to ambush and take prisoner what I thought I could never earn or be given. You were not a ship to be hijacked, but I couldn’t think of any other plan but subterfuge and surprise. Though not as much of a surprise as what happened at dinner. The revolution started prematurely because the idiot conspirator blew up his secret ammo dump and lit the sky with his intentions. Sometimes these accidents end in new nations, but more often they end badly, in hangings and beheadings. And people running into the night. I can’t be sorry that I asked you to marry me, because that was the one true part in all the smoke and rubble, but I’m sick as hell that I asked you so badly.
Even though I’d kept my counsel from you, I should have at least had the courtesy to keep it from others as well, till you’d had the year of grace and rest you’d asked for. But I became terrified that you’d choose another first. So I used the garden as a ploy to get near you. I deliberately and consciously shaped your heart’s desire into a trap. For this I am more than sorry, I am ashamed.
You’d earned every chance to grow. I’d like to pretend I didn’t see it would be a conflict of interest for me to be the one to give you some of those chances, but that would be another lie. But it made me crazy to watch you constrained to tiny steps, when you could be outrunning time. There is only a brief moment of apogee to do that, in most lives.
I love you. But I lust after and covet so much more than your body. I wanted to possess the power of your eyes, the way they see form and beauty that isn’t even there yet and draw it up out of nothing into the solid world. I wanted to own the honor of your heart, unbowed in the vilest horrors of Komarr. I wanted your courage and your will, your caution and your serenity. I wanted, I suppose, your soul, and that was too much to want.
I wanted to give you a victory. But by their essential nature triumphs can’t be given. They must be taken, and the worse the odds and the fiercer the resistance, the greater the honor. Victories can’t be gifts.
But gifts can be victories, can’t they. It’s what you said. The garden could have been your gift, a dowry of talent, skill, and vision.
I know it’s too late now, but I just wanted to say, it would have been a victory most worthy of our House.
Yours to command,
Miles Vorkosigan”
― Lois McMaster Bujold, A Civil Campaign
tags: apology, letter, love
34 likes

“The trouble with atheism," Temoc said, "is that it offers a limited range of curses.”
― Max Gladstone, Two Serpents Rise
31 likes

“He drinks the life of those who come too close to him. Steals their youth. Also,” she said after a pause, “he moisturizes.”
― Max Gladstone, Three Parts Dead
19 likes

“The God Wars had not been a pleasant time for Craftsmen and Craftswomen around the world. One day, you’re a simple thaumaturge, idly meddling in matters man was not meant to comprehend. The next, a collection of beings as old as humanity, with legions of followers, declare war on your “kind”, and neighbours who once thought you a harmless eccentric with a fondness for mystic sigils and foul unguents see you as an affront to Creation.”
― Max Gladstone, Three Parts Dead
tags: affront-to-creation
19 likes

“The world is made by the people who show up for the job.”
― Lois McMaster Bujold, CryoBurn
77 likes

Polls voted on by Anurag