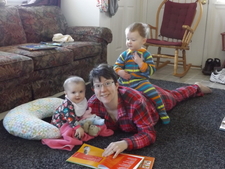 This will prevent Danica from sending you messages, friend request or from viewing your profile. They will not be notified. Comments on discussion boards from them will be hidden by default.
Sign in to Goodreads to learn more about Danica.

See all 4 books that Danica is reading…

“You know what guys do? They stand up for people.”
― David Lubar, Sleeping Freshmen Never Lie
tags: integrity
6 likes

“You could rattle the stars," she whispered. "You could do anything, if only you dared. And deep down, you know it, too. That’s what scares you most.”
― Sarah J. Maas, Throne of Glass
6356 likes

“Sometimes, you read a book and it fills you with this weird evangelical zeal, and you become convinced that the shattered world will never be put back together unless and until all living humans read the book.”
― John Green, The Fault in Our Stars
tags: books, power-of-words, reading
26366 likes

“God doesn't like lesbians," Grandma Huberman hised, throwing the magazine in the trash.
Jennifer knew what lesbian meant, and she knew she probably was one. But she couldn't understand why God would hold that against her or against Monica Mathers, who'd never started a war or killed anybody, and whose deadeye three-pointers were straight-up amazing. After all, hadn't God made both of them? But people were like that, she'd noticed. They'd invoke Godly privilege at the weirdest of times and for the most stupid reasons.”
― Libba Bray, Beauty Queens
tags: god, godly, lesbian, stupid
68 likes

“So violent. You want to mug and tase everybody these days."
"I do," Zuzana agreed. "I swear I hate more poeple every day. Everyone annoys me. If I'm like this now, what am I going to be like when I'm old?"
"You'll be the mean old biddy who fires a BB gun at kids from her balcony."
"Nah. BBs just rile 'em up. More like a crossbow. Or a bazooka.”
― Laini Taylor, Daughter of Smoke & Bone

Denver Librarians & Readers — 94 members — last activity Feb 01, 2011 09:06AM
This group is comprised of Denver librarians and other library staff....

A. Lee Martinez
author of: Gil's All Fright Diner

Kazu Kibuishi
author of: The Stonekeeper

Imagine That! Pictures Books about Imagination

Polls voted on by Danica