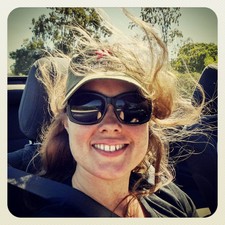 This will prevent Phillipa from sending you messages, friend request or from viewing your profile. They will not be notified. Comments on discussion boards from them will be hidden by default.
Sign in to Goodreads to learn more about Phillipa.

“If we all threw our problems in a pile and saw everyone else's, we'd grab ours back.”
― Regina Brett
124 likes

“Alison’s mum has had a lot of plastic surgery and she wears fake eyelashes the size of hairbrushes. She looks sort of like a person but not really, like someone explained to aliens what a person is and they did their best to make one of their own.”
― Tana French, The Secret Place
11 likes

“Think for a moment about the Agricultural Revolution from the viewpoint of wheat. Ten thousand years ago wheat was just a wild grass, one of many, confined to a small range in the Middle East. Suddenly, within just a few short millennia, it was growing all over the world. According to the basic evolutionary criteria of survival and reproduction, wheat has become one of the most successful plants in the history of the earth. In areas such as the Great Plains of North America, where not a single wheat stalk grew 10,000 years ago, you can today walk for hundreds upon hundreds of miles without encountering any other plant. Worldwide, wheat covers about 870,000 square miles of the globe’s surface, almost ten times the size of Britain. How did this grass turn from insignificant to ubiquitous? Wheat did it by manipulating Homo sapiens to its advantage. This ape had been living a fairly comfortable life hunting and gathering until about 10,000 years ago, but then began to invest more and more effort in cultivating wheat. Within a couple of millennia, humans in many parts of the world were doing little from dawn to dusk other than taking care of wheat plants. It wasn’t easy. Wheat demanded a lot of them. Wheat didn’t like rocks and pebbles, so Sapiens broke their backs clearing fields. Wheat didn’t like sharing its space, water and nutrients with other plants, so men and women laboured long days weeding under the scorching sun. Wheat got sick, so Sapiens had to keep a watch out for worms and blight. Wheat was attacked by rabbits and locust swarms, so the farmers built fences and stood guard over the fields. Wheat was thirsty, so humans dug irrigation canals or lugged heavy buckets from the well to water it. Sapiens even collected animal faeces to nourish the ground in which wheat grew.”
― Yuval Noah Harari, Sapiens: A Brief History of Humankind
4 likes

“And so the picture that I showed her that Sunday, a picture I'd seen countless times since I was a boy, brought home to me for the first time the strangeness of my relationship to the people I was interviewing, people who were rich in memories but poor in keepsakes, whereas I was so rich in the keepsakes but had no memories to go with them.”
― Daniel Mendelsohn, The Lost: A Search for Six of Six Million
tags: holocaust, holocaust-survivors, keepsakes, memories
1 likes

Polls voted on by Phillipa