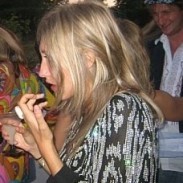 This will prevent Violet from sending you messages, friend request or from viewing your profile. They will not be notified. Comments on discussion boards from them will be hidden by default.
Sign in to Goodreads to learn more about Violet.

Violet wells is currently reading
A Buyer's Market (A Dance to the Music of Time #2)
by Anthony Powell
bookshelves: currently-reading

Violet wells is currently reading
Shakespeare: The Invention of the Human
by Harold Bloom
bookshelves: currently-reading

“It is a tragicomic fact that our proper upbringing has become an ally of the secret police. We do not know how to lie. The Tell the truth! imperative drummed into us by our mamas and papas functions so automatically that we feel ashamed of lying even to a secret policeman during an interrogation. It is simpler for us to argue with him or insult him (which makes no sense whatever) than to lie to his face (which is the only thing to do).”
― Milan Kundera, The Unbearable Lightness of Being
1 likes

“During the last two hundred years the blackbird has abandoned the woods to become a city bird. From the planet's viewpoint, the blackbird's invasion of the human world is certainly more important than the Spanish invasion of South America or the return to Palestine of the Jews. A shift in the relationships among the various kinds of creation (fish, birds, humans, plants) is a shift of a higher order than changes in relations among various groups of the same kind. Whether Celts or Slavs inhabit Bohemia, whether Romanians or Russians conquer Bessarabia, is more or less the same to the earth. But when the blackbird betrayed nature to follow humans into the artificial unnatural world, something changed in the organic structure of the planet. And yet no one dares to interpret the last two centuries as the history of the invasion of man's cities by the blackbird. All of us are prisoners of a rigid conception of what is important and what is not, and so we fasten our anxious gaze on the important, while from a hiding place behind our backs the unimportant wages ts guerrilla war, which will end in surreptitiously changing the world and pouncing on us by surprise.”
― Milan Kundera, The Book of Laughter and Forgetting
tags: ecosystem
1 likes

“Every work of art is one half of a secret handshake.”
― Michael Chabon, Pops: Fatherhood in Pieces
tags: art
7 likes

“Human lives...are composed like music. Guided by his sense of beauty, an individual transforms a fortuitous occurrence... into a motif, which then assumes a permanent place in the composition of the individual's life”
― Milan Kundera, The Unbearable Lightness of Being
tags: composition-motif-life
2 likes

“No story is ever told just once.”
― Michael Ondaatje, Running in the Family
5 likes

Polls voted on by Violet