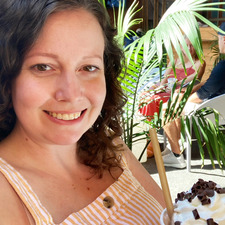 This will prevent Julie from sending you messages, friend request or from viewing your profile. They will not be notified. Comments on discussion boards from them will be hidden by default.
Sign in to Goodreads to learn more about Julie.

The Paris Orphan by Natasha Lester
1 highlight
“Mourning,” Amelia scoffed. “Nobody mourns anymore. We’d never do anything else given how often people die lately.”
See Julie’s 19 books with notes and highlights…

“The adventure is over. Everything gets over, and nothing is ever enough. Except the part you carry with you. It's the same as going on a vacation. Some people spend all their time on a vacation taking pictures so that when they get home they can show their friends evidence that they had a good time. They don't pause to let the vacation enter inside of them and take that home.”
― E. L. Konigsburg, From The Mixed Up Files Of Mrs. Basil E. Frankweiler
77 likes

“Children betrayed their parents by becoming their own people.”
― Leslye Walton, The Strange and Beautiful Sorrows of Ava Lavender
tags: family-relationships, inspirational
459 likes

“She felt as if she had been on the outside of happiness her whole life.”
― Kate Atkinson, A God in Ruins
13 likes

“Distance changes utterly when you take the world on foot. A mile becomes a long way, two miles literally considerable, ten miles whopping, fifty miles at the very limits of conception. The world, you realize, is enormous in a way that only you and a small community of fellow hikers know. Planetary scale is your little secret.

Life takes on a neat simplicity, too. Time ceases to have any meaning. When it is dark, you go to bed, and when it is light again you get up, and everything in between is just in between. It’s quite wonderful, really.

You have no engagements, commitments, obligations, or duties; no special ambitions and only the smallest, least complicated of wants; you exist in a tranquil tedium, serenely beyond the reach of exasperation, “far removed from the seats of strife,” as the early explorer and botanist William Bartram put it. All that is required of you is a willingness to trudge.

There is no point in hurrying because you are not actually going anywhere. However far or long you plod, you are always in the same place: in the woods. It’s where you were yesterday, where you will be tomorrow. The woods is one boundless singularity. Every bend in the path presents a prospect indistinguishable from every other, every glimpse into the trees the same tangled mass. For all you know, your route could describe a very large, pointless circle. In a way, it would hardly matter.

At times, you become almost certain that you slabbed this hillside three days ago, crossed this stream yesterday, clambered over this fallen tree at least twice today already. But most of the time you don’t think. No point. Instead, you exist in a kind of mobile Zen mode, your brain like a balloon tethered with string, accompanying but not actually part of the body below. Walking for hours and miles becomes as automatic, as unremarkable, as breathing. At the end of the day you don’t think, “Hey, I did sixteen miles today,” any more than you think, “Hey, I took eight-thousand breaths today.” It’s just what you do.”
― Bill Bryson, A Walk in the Woods: Rediscovering America on the Appalachian Trail

“Don't try to comprehend with your mind. Your minds are very limited. Use your intuition.”
― Madeleine L'Engle, A Wind in the Door
tags: intuition
446 likes

Polls voted on by Julie