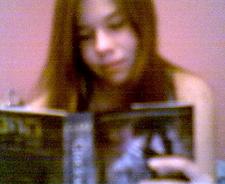 This will prevent Chelsey from sending you messages, friend request or from viewing your profile. They will not be notified. Comments on discussion boards from them will be hidden by default.
Sign in to Goodreads to learn more about Chelsey.

Chelsey is currently reading
How Not to Diet
by Michael Greger (Goodreads Author)
bookshelves: currently-reading

See all 5 books that Chelsey is reading…

“Nobody's ever asked me to a party before, as a friend. Is that why you dyed your eyebrow, for the party? Should I do mine too?”
― J.K. Rowling , Harry Potter and the Half-Blood Prince
tags: humor, party
794 likes

“For future reference, Harry, it is raspberry...although of course, if I were a Death Eater, I would have been sure to research my own jam preferences before impersonating myself.”
― J. K. Rowling, Harry Potter and the Half-Blood Prince
tags: dumbledore
1017 likes

“It was, he thought, the difference between being dragged into the arena to face a battle to the death and walking into the arena with your head held high. Some people, perhaps, would say that there was little to choose between the two ways, but Dumbledore knew - and so do I, thought Harry, with a rush of fierce pride, and so did my parents - that there was all the difference in the world.”
― J.K. Rowling, Harry Potter and the Half-Blood Prince
tags: inspirational
3653 likes

YA Paranormal and Fantasy Book lovers — 2425 members — last activity Nov 30, 2022 10:46AM
For all those who LOVE PC CAST, LJ Smith, Melissa Marr, Richelle Mead, JK Rowling...and many many more then this is the site for you!

Polls voted on by Chelsey